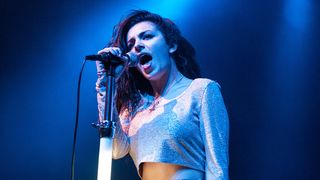 With her intoxicating debut album, True Romance, Charli XCX arrived this year like a bolt from the blue. But the 21-year-old British dark pop princess, born Charlotte Emma Aitchison, who dreamed of being a Spice Girl at seven and started writing in earnest at the age of 14, has been laying the groundwork for international success for a number of years.

"I've always known what I wanted to do," she tells MusicRadar. "When I was younger, I had a completely different perception of the music industry, the idea that it was some sort of dream factory. But I get it now; I know that you have to work very hard, and I do work very hard. I'm not a fool. I know there's gonna be ups and downs to all of this, but at the end of the day, I have to put in the time and do the work."

In 2012 Charli issued not one, but two well-received mixtapes, Heartbreaks And Earthquakes and Super Ultra, which combined '90s-inspired synth pop with film excerpts, released a fiesty electro-infused EP, You're The One, and co-wrote Icona Pop's breakout hit, I Love Hit. Not bad for a year's work.

While on tour in the US, Charli is keeping busy by plotting her next album. We caught up with her recently to talk about True Romance, how she approaches songwriting and her love of French yé-yé pop.

Even for people who have done it a long time, songwriting can be quite mysterious. Do you have any particular process?

"I don't really have any kind of method for writing. Sometimes I'll get sent beats and I'll work on something. I might sit down and play keyboards until something comes to me. Other times it'll be a complete collaboration with a producer. I know that I've walked down the street and thought about a song, and that's when I'll have to record something right there onto my phone. There's no set way.

"Some people are very structured in how they write, but that's just not me. I feel like my writing process is a bit of a mess - I don't have a place, I don't have a time. I do like to write at night, so that's one thing I can say. My only rule for writing is, it has to be fast. I don't like to spend a lot of time on anything. I think the faster a song is written, the better it will be. All the best songs are written in half an hour. You can't dwell on things."

One of the things I like about the record is how it's not slick. It's very messy pop, with lots of wild sounds and songs that don't do what they're supposed to.

"Yeah, that's cool. I didn't plan that, really. To me, it's a coming-of-age record for teenagers. I wrote it when I was growing up, mainly during the years of 16, 17, 18. So it is a messy record, but that's what life is all about, right? Especially during those years, things are messy. If the record sounds like that, that's fine."

"I'm not listening to too much new music," says Charli XCX. "I just don't find that helpful." © Rahav Segev/ZUMA Press/Corbis

You titled the album True Romance, and you used excerpts from that film on Super Ultra. The movie must have made a big impression on you.

[Laughs] "I do love that movie, but actually, I didn't directly name the record after it. The reason why I called the album True Romance is because all of the songs deal with romance and my experiences with love. After writing it and listening to the songs, I've come to the realization that you really can't have a romance that's true without having all the other awful moments, where you cry and you're thrashing about. But then you have those other moments when you're walking on a cloud, so that's the trade-off. That's what the record is about: those moments when you're in agony and along, and those times when you're in absolute ecstasy."

There's a strong element of '90s pop in your music. Are there any artists from that era that you consciously draw from?

"I don't know if I draw from anybody from that time. When I was younger, I was really into Britney Spears and Christina Aguilera - the greats. I was also into Shampoo and stuff like that. But that's when I was younger, when I was so in awe of everything. Making the record, my main inspiration was a lot of French electro. I like Justice a lot. But then there's '80s pop, things like Martika, T'Pau, stuff like that. I mix it up a lot."

The song You're The One has a massive bass synth hook. It reminds of Siouxsie And The Banshees' Kiss Them For Me. Ever hear that one?

"I'm into that. I was working with Patrik Berger on that track - we actually wrote that on the same day I wrote I Love It. I guess we were just on a roll. We wanted to do something very industrial and hard. At the time, I was listening to a lot of dark pop, so I was inspired by a lot of the deep bass sounds. Sure, Siouxsie is there, too. We just kind of rolled with it."

The song You (Ha Ha Ha) is a real kiss-off to somebody. It's pretty brutal.

"Yeah, it's exactly that - it's a breakup song. It's one of those things where you know you got into a bad relationship at the very beginning, but you just kind of roll with it. By the end of it, when it's finally over, it's not a surprise; you're over it 'cause you knew it was gonna happen. Musically, it's a Gold Panda sample, from the song You. That's such an amazing original track, so I decided that I wanted to go it and take it my own way."

Who could have predicted you would use a Todd Rundgren sample in So Far Away. How did that come about?

"I was talking with this producer, Paul White, and he sent me a load of beats, and one of them was So Far Away with that sample on it. I just warmed to it straight away; it sounded so luscious and ethereal. It just happened. This was when I was making a lot of mixtapes with samples from movies like Kill Bill and Cruel Intentions. I was sampling Drake and a lot of stuff, just being sort of in that zone."

It's not a sample, but there's a little bit of a Tainted Love vibe in the song Black Roses. Do you hear that?

"Oh, well, that's cool. That wasn't really in my brain when I was writing it, but I love Soft Cell, so yeah, I'll take that."

Have you discovered anything good while touring the States?

"I'm actually bad at that kind of thing. I have my five artists that I've been listening to for, like, the last three months, and that's it. Because I'm writing a new record at the moment, I'm not listening to too much new music. I just don't find that helpful; I prefer to watch movies or music videos. So I'm listening to French yé-yé pop - Sylvie Vartan, Serge Gainsbourg, Brigitte Bardot, France Gall, people like that. But as far as new stuff, I just haven't had the time."