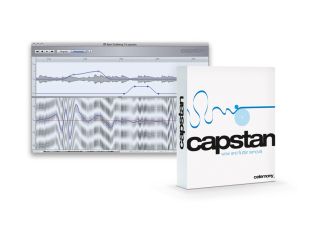 Capstan: does it have the no-wow factor?

Melodyne developer Celemony Software is showing off its new product, Capstan, at the AES Convention that's currently taking place in London. This is a piece of restoration software that's designed to eliminate the wow and flutter effects that are often heard on degraded tape or vinyl recordings.

Capstan is based on Melodyne's Direct Note Access technology and, as well as being able to recognise wow and flutter, also promises to pick out continuous speed variations.

You can find out more in the press release below; Capstan will be available to buy (and a demo version offered for download) in June, though we don't yet know at what price. Check out the Celemony website for a video demo.

Celemony Software is presenting a new music restoration program at the AES in London. Capstan removes wow and flutter from musical material of all kinds and commends itself therefore to professional restoration and mastering studios. Capstan runs as a stand-alone application under Windows and Mac OS, supports all common two-track formats and will commence shipping in mid June 2011.

For over 100 years, music has been recorded on mechanical storage mediums, and for over 100 years such recordings have been plagued by the same problems: wow and flutter. Who isn't familiar with the wobbling and warbling, the droning and dragging? Mechanical degradation caused by defective devices or sticking tapes, by aging or defective storage. Furthermore, wow and flutter were for the most part irremediable.

Countless recordings of renowned orchestras, big bands and rock groups are currently slumbering deep in archives because precisely this problem has rendered them unusable. The tapes worthless, the recordings lost to posterity. Until now.

For with Capstan there is now for the first time a program capable of removing wow and flutter from musical recordings - whether on tape, compact cassette, wax, shellac or vinyl. Capstan detects wow and flutter by analyzing the musical material itself, so the medium is of no relevance. In this, Capstan is clearly superior to solutions such as bias tracking, because Capstan still works even if the tape has already been copied several times or digitized only in low resolution.

Being musically intelligent, the Capstan algorithm is capable of recognizing not only the minutest amounts of wow and flutter but also continuous speed variations within the musical material itself and makes possible detailed editing that extends even to drawing in the curve manually. It is based on the patented DNA Direct Note Access technology made famous by the award-winning program Melodyne, which is used worldwide in all major studios for the editing of pitch and timing.

Whilst the precise detection of the wow and flutter represents the actual technological revolution, repairing the recording is easy: the musical material is simply played back with the velocity curve inverted. Pure varispeed - guaranteed free from artifacts.

"Already during the Capstan test phase we unearthed our first musical treasure," relates Capstan product specialist Mathis Nitschke: "a recording of Wilhelm Furtwängler conducting Beethoven's Ninth Symphony in 1954. Even to this day, the interpretation is regarded as perfect, but the same unfortunately could no longer be said of the tape, chronic wow and flutter and even a momentary tape freeze having hitherto spoilt the enjoyment. Thanks to Capstan, a restored version will now be released in 2012."

Capstan is hardware-independent, runs as a stand-alone application under standard 64-bit operating systems (Windows or Mac OS) and handles all commonly encountered two-track formats. Capstan will be released in mid June 2011, and a demo version will be made available at the same time on the Celemony website.