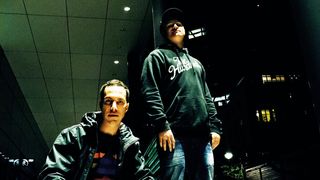 Calyx & Teebee: The neurologists will see you now…

London-based Larry Dons' Calyx and Norwegian, Torgeir Byrknes' Teebee first collaborated on the 2005 release, Moving Shadow. Since then, the pair have produced numerous chart-topping albums and embarked on a huge world tour.

Their latest album, 1x1 is out now and promises "the full throttle forces of pounding basslines and meticulously constructed mechanics".

Wanting to get in on some of this action, we secured some quality face time with the drum 'n' bass production masters, who reveal their top techniques for generating amazing basslines and making them work in the broader mix.

For more DnB bass design tutorials, get your grubbies on the August edition of Computer Music (cm232).

You guys are famous across the globe for your mind-bending basses. What inspires you to create these kinds of sounds? Do you hear a montage of animalistic growls in your head and try to recreate them, or do you allow processing and experimentation to lead you down a particular path?

"With some basses, we might have the sound or complete bassline in our heads before we attempt to create it, but other times it's a case of pure experimentation, exploring where a sound can be taken before a mid/sub/bassline emerges. That type of creative process can be so enjoyable - just going down avenues of twisting something up not knowing when a magic moment might happen. Through experimentation and trial-and-error, we end up learning so much more about the parameters and techniques we're exploring, and that in turn gives us more ability to create other basses and sounds that we've created in our imagination and then want to recreate in a track or a sound design session."

Do you like to compartmentalise your time by separating the sound design process from the composition/arrangement process? Talk us through a typical Calyx & Teebee bass-building session.

"This varies from track to track. Sometimes we'll make sounds and begin the bassline composition process in separate arrangements before bringing it into the composition for a specific track. We can spend days on end working on sound design - just making sounds, patches and variations that will be used in future tracks. Other times, we'll start composing the bass and mids within the track arrangement itself. Most often, we'll have beats on the go before the bass really starts taking shape, as the beat is the foundation and scaffolding the bass builds and works around - both in terms of the pattern and the frequency content. We'll often work to get a core loop as good as it can be before we move onto variation and progression."

Are there particular 'go-to' synthesisers (either software or hardware) you find are best suited to twisted bass synthesis?

"We mostly use our hardware synths for basses, subs and mids, but there are loads of increasingly impressive soft synths coming through. Leaving the hardware synths we have gathering dust, we often reach for our two Virus TI Snows, Prophet '08, Prophet 12, MiniBrute, Moog Voyager, Moog Sub Phatty…

"For soft synths, well, they just keep getting better. Xfer Records' Serum is our current favourite. The end results from our synth use are rarely what comes out of a patch, though - the key is knowing what you can achieve with a relatively raw sound from a synth that not a lot of people have or use. That's the reason why we lean towards hardware: it's an investment, and sometimes quite an expensive one, so we form a relationship with that unit in a way that you just don't with something you can't touch."

There's been lots of speculation as to how your famous bass sounds are created. Discussed techniques include splitting a single bass signal into two or three 'bands' with EQ/filtering before processing each band separately; or starting with a single synth patch then applying processing to fill out the sound. How do you like to work?

"All of the above! We have many different techniques depending on the sounds themselves. Some sounds have a full range of frequency and can be processed and routed as a single entity. Many others will be split into layers for separate processing before we join them back together. We use sends to apply and process various effects, reverbs, delays etc. These parallel layers are invariably routed back together and then processed as one, either internally with a chain of plugins on the bus, or externally through hardware. Often the bus that unites all the mids and sends will then route to another bus that unites them with the sub. Multiband compression is great to control spikes and smooth out sections that have a lot of movement within the frequency spectrum. The key is a lot of bouncing. Various stages will have a ton of plugins all doing subtle things; so bounce to audio and start the whole process again to clear out."

Often, neuro tracks feature several different mid-range basses and variations, all pieced together to form a cohesive 'whole'. How do you prevent these elements from sounding too disjointed?

"When we have a track featuring several different basses and variations, there's a line to be walked between consistency and cohesion, but also a contrast between the different elements - obviously, they have to complement each other and work together.

"It's not always about making every piece of the jigsaw equally prominent; often one of the elements provides the dramatic or dynamic moment whilst the others sit around it and complement it. We pay a lot of attention to the low-end as that's the area where we want more consistency across the different 'bass' components. The mids, tops and harmonics can be more varied than the sub, but we're always paying close attention to controlling the levels and maintaining a consistent RMS without unwanted peaks."

How do you approach the all-important blend of heavy sub bass and detailed, moving mids? Do you use a separate sub bass synth/sample underneath the mid-range elements to provide low-end consistency, or is the sub formed from the original source sound?

"With some source sounds, the low-end is already there in a single sound or element. This is often the case with the Virus, which can generate such a superb range of frequencies throughout a sound.

"Generally, if there's a lot of movement and variation in the mid-range, we'll often have a more consistent and repetitive layer providing the sub, while other layers above can vary more in their frequency content, textures and harmonics. For us, the key is making the layers combine as a seemingly single entity, and often this is a case of being conscious of sculpting mid-range harmonics that bridge and combine the sub with the higher frequencies.

"Always avoid an end result that has loads of low-end and a separate-sounding top layer; the goal is always to create a 'one-ness' in the elements that combine to become a C&T bass. Mid/side EQ and compression/expansion is very important too; the famous 'V' shape is still very much at play when deciding what frequencies sit where in the stereo image."

How do you juggle kick and bass frequencies? Do you have any particular tricks or techniques for getting a huge DnB kick sound alongside an enormous bass?

"We have loads of techniques for this, depending on the desired effect. It's critical to consider the frequency content of the kick and sub before deciding which technique to employ. Sidechaining compressors can provide an effective way of creating pockets within the sub that the transient of the kick can sit in.

"Sometimes we manually cut and create envelopes in bass and mid elements as an alternative way to shape and control the attack and release in response to the shape and content of the kick. If a loud mix is the objective, being aware of the frequency range at any time is key to avoiding clashes. If you have a kick that smacks great but has a thick body at 40-60Hz, you want to avoid any sub frequencies hitting at the same time.

"A long kick can often be a hindrance. Shortening kicks - and snares, for that matter - creates more space for subs and mids to breathe. To retain dynamics, it's also important to remember to put some space between sounds. If your sub is constant to the moment the kick hits again, the compressors/limiters don't have time to reset at all, so you'll end up with something flat-sounding.

"Also cutting sounds at a zero crossing is key, even if you have a volume fade at the end of the sound. No clicks allowed here!"

Calyx & Teebee's 1X1 is out now on Ram Records.