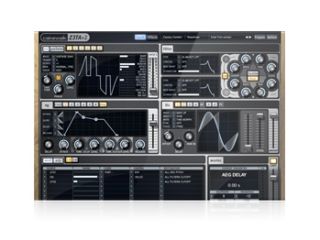 Z3TA+ 2 will be available in July.

Cakewalk's Z3TA+ has proven to one of the most enduringly popular plug-in synths ever created. It was originally released by rgc:audio back in 2002, yet only last year, MusicRadar users voted it one of the 17 best VST plug-in instruments in the world today. We're delighted, then, that Cakewalk has just announced that a successor, Z3TA+ 2, will finally be released in July.

Little is known about the specifics of the update, but Cakewalk has said that Z3TA+2 will feature "a redesigned user interface, deeper editing controls, new effects, and superior sound quality".

New sounds are also promised, designed by many of the same people who concocted the original Z3TA+ presets.

Z3TA+2 is being launched as part of Cakewalk's Summer Of Sonar X1 promotion, and we're told that existing users will be able to pick it up for "a very special price". It seems that it'll be available to non Sonar users too, though we're guessing that it'll retain its PC-only status.

More details as we get them.