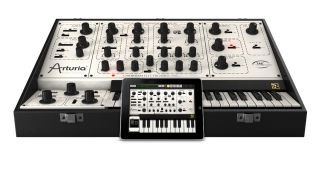 Does this update to iSEM herald a new era of plugin-style operation on iOS?

Audio Units for iOS have been in the works for a little while now, but we'd heard next to nothing about developers actually supporting them.

Now, though, Arturia has got the ball properly rolling by announcing that its iSEM synth - an emulation of Oberheim's Synthesizer Expander Module from the '70s - can now operate as an Audio Unit within GarageBand for iOS. This means that there's no need for Audiobus or Inter App Audio.

As iSEM development partner Rolf Wöhrmann explains, "The main difference is that you can now run iSEM from within an app like GarageBand for iPad in much the same way as you would work with standard Arturia plugins when running them in desktop- or laptop-based host applications - integrating the great synth sounds of iSEM into your GarageBand projects without leaving the GarageBand app, in other words.

"By using Audio Unit Extensions-compatible apps like iSEM, GarageBand users can extend its sonic capabilities above and beyond those of the built-in instruments into the wonderful world of Arturia. Indeed, it appears that we are one of the first - if not the first - to support this.

"iSEM users can now easily record and multitrack their iSEM-based creations within GarageBand, adding drums, voice, guitar, and other sounds to make more complete musical arrangements, if they so wish. It's also perfectly possible to have multiple instances of iSEM running in GarageBand - at least three or four when using latest-generation iPads, which was impossible with the previous 'standalone' version of iSEM."

This level of integration is precisely what a lot of iOS musicians have been crying out for, and we look forward to testing it for ourselves.

Arturia iSEM 1.2 is available now from the Apple App Store priced at £7.99/$9.99 - you'll need to be running iOS 9 to take advantage of the Audio Units compatibility. You can learn more about the app on the Arturia website.