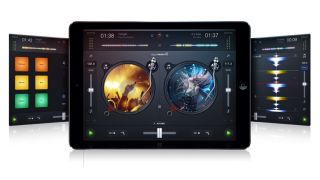 Spotify tracks can now be used in Algoriddim's djay.

With Algoriddim's djay apps for iPad and iPhone now including direct access to Spotify's 20 million-strong library of choons, we ask those in the know if they think the future of DJing has streaming flowing through it,

"Mixvibes has always been ahead of trends, from vinyl to CD to MP3. We recently celebrated the rise of the streaming service by integrating SoundCloud on all our platforms: Mac, PC, iOS and Android. But there are still some challenges ahead: network access and legal issues to name just two. Yet we're confident that players in the music industry will soon find a win-win situation. We're at the beginning of an era and Mixvibes is thrilled to be pioneering it."
Pierre Buttin, Design & Marketing

"Streaming is a great format for music discovery and listening, and currently for dabbling with mixing techniques for the beginner DJ. But rights issues prohibit DJs from practicing more innovative mixing techniques such as mixing more than two tracks at once. Also, streaming at 320kpbs through a smartphone or home stereo system may sound fine, but for large club and festival venues, it falls far short of what the dancefloor expects. There needs to be continued innovation, infrastructure for connectivity, and pioneering on rights before it's ready."
Lloyd Starr, President, Beatport Pro

"As a DJ/producer/moral human, I'm very reluctant to embrace music streaming services because I don't agree with the royalties model they enforce on labels and artists. I genuinely don't think artists have ever been more widely exploited. But, like it or not, I think the last few years prove that anything that makes life more convenient for consumers of music (DJs included) will be quickly embraced. If DJs can reliably stream any track they wantat at least 320kbps MP3 quality, then I can't see them not going for it!"

"Many of us depend on the cloud for everything from file sharing to video services. DJs are actively using iCloud for iTunes library access as well as Spotify, which was recently integrated into Algoriddim's djay 2 application.

"It's easy to see streaming services becoming a staple for DJs, as the related technology and software evolves to take advantage of expanding high-speed internet availability. Today, our iDJ Pro, Mixdeck Quad and iDJ Live II controllers let you perform with over 20 million Spotify tracks on the djay 2 app. The revolution isn't coming - it's already here."
Ross Goodwin, Project Manager