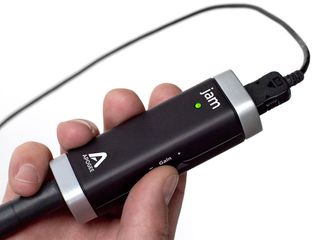 Following Apple's announcement of the iPad 2 and GarageBand, Apogee has revealed Jam, a new guitar input interface for the iPhone, iPod touch, iPad and, rather surprisingly, Mac. Given that Apogee has a close working relationship with Apple, we'd say that the timing of this launch is not coincidental.

Jam promises to do what products such as IK Multimedia's iRig have done but at higher quality: we'll be interested to test whether it really does sound better. It'll be released on 31 March at a price of $99. Here's what Apogee has to say about it:

Apogee Electronics is pleased to announce JAM, a studio quality guitar input for iPad™, iPhone®, iPod touch® and Mac. Featuring PureDIGITAL technology, JAM enables musicians to practice, record and rock out with ultimate tone using the guitar amps and effects in Apple's GarageBand software on iPad 2 or Mac. No configuration necessary, just plug in and play and experience the legendary sound quality of Apogee for $99.

"We're very excited to enter the rapidly growing world of iOS with this incredible product," says Apogee Co-founder and CEO Betty Bennett. "JAM is the first high-quality interface that makes a digital connection to your iPad, iPhone, and iPod touch, and the only one that also works on your Mac. You will immediately notice the difference between the sound quality of JAM and other similar products because its converters are designed by the same team of engineers responsible for our award-winning, high-end professional interfaces. JAM promises to become a standard for guitarists who want a professional, portable way to connect to these devices and benefit from the amazing music-making apps they offer."