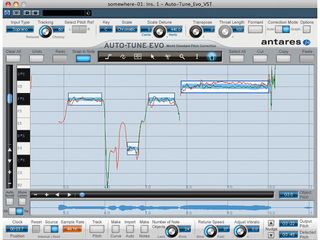 Antares Auto-Tune is probably the most famous plug-in ever, having transcended the audio software market to become well known - by name, at least - among music fans in general.

Now the company has announced Auto-Tune Evo, a next-gen version of the software and the successor to Auto-Tune 5.

As in previous versions, Auto-Tune Evo offers Automatic and Graphical modes. However, plenty has changed in this update; in fact, we're told that the new software is based on a completely new core technology known as Evo Voice Processing.

Other notable improvements include a redesigned user interface and reorganised controls. These changes have been implemented with the intention of making Auto-Tune smoother and more intuitive in use.

In a year when Celemony unveiled the much-anticipated Direct Note Access technology, Antares was always likely to come up with a response - it remains to be seen whether or not this release can keep them at the head of the pitch manipulating pack.

Auto-Tune Evo is available now for Mac and PC in TDM, RTAS, VST and AU formats. Prices are $399 for the native versions and $649 for TDM. Upgrades from previous versions are also being offered.

You can find out more at the Antares website.