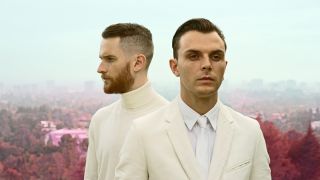 But Bureau wasn't to last long, and neither did Hutchcraft and Anderson's next pseudonym, Daggers, as the duo struggled to find their niche. Thankfully, that all changed in 2009, when the pair changed their name again to Hurts and made an amateur video for the single Wonderful Life. The track went viral on YouTube clocking up 26 million hits.

The rest, as they say, is history. Both Hurts' debut album, Happiness (2010) and the follow-up Exile (2013) hit the UK top 10, with similar success across a swathe of European countries. This month sees the release of Hurts' third album, giving us the perfect opportunity to speak to Anderson about the creative and technical processes behind the record's conception.

You had two name changes before settling on 'Hurts', why did it take you a while to find your sound?

"When we first met 10 years ago we were both quite raw. Theo took a few years to find his true voice and our combined skills didn't really fuse together. So although a lot of the songs had these great moments of potential, they were mostly very strange!

"I think when Hurts began we'd got all of that out of our system and what was left was very self-aware. It's much like growing up; you make mistakes and then eventually figure out who you really are. Hurts was us figuring out who we were. It was all very natural."

Could you give any advice to up and coming artists searching for their own identity?

"You need to be very honest with your ambitions and not simply chase the tail of other bands or genres. You also have to be patient and hope that success will come around when you least expect it - even if it might never come round.

"I'd also say you have to keep a real eye out for when something you've written moves a lot of people at the same time, then capitalise on it if you can."

Describe the shock of watching a single go viral on YouTube and rack up 26 million views?

"It was insane. I was still living in the rubble in Manchester scraping around for my next dinner while this video was getting 100k views a day. It was too surreal to really buy into all that, so I just floated along with it until we got a record deal - then things became more believable and our lives genuinely changed.

"I still look at that video with incredible fondness and pride. It cost £20 to make and changed lots of people's lives, not just our own."

Were you influenced or inspired by other synthpop acts?

"In the years leading up to Hurts, yes, massively. Prince was a big influence. Depeche mode and Tears For Fears too. But when we wrote the first album, I remember just switching off to everything and going into our own little world. That's why that album sounds so unique."

How are those influences absorbed into your music?

"They accumulate in your subconscious over time, then at any given moment crystallise into something tangible. I always find that it's a delicate balance. The day you actively set out to recreate someone else's sound is probably a sign that your inspiration pot is empty, so I tend to not listen to much other music while I'm recording."

What was your creative and conceptual approach to writing the new album Surrender?

"We worked in different environments, which kept the process interesting. We wrote a lot more songs this time and didn't spend too long finishing ones that weren't at the required level. We also wanted to work with other writers and producers to keep things fresh. We had the title of the album before any songs had been written, which we often tend to do.

"It helps to focus our writing, and in the case of Surrender, as a word, we felt our music needed to have a greater sense of abandon and freedom. Surrender fitted that perfectly. It's an album written in the spirit of letting things go and living for the moment."

How does the creative process begin in the studio in terms of laying down tracks or demos?

"It's as basic as it gets really. A guitar and vocal or a piano and vocal and that's basically it. We don't even touch the computer until that first stage is sound as a pound lyrically, melodically and structurally. I think we've always tended to do that because we don't actually know what we're doing most of the time, so we need to be sure the song works first."

Are your and Theo's roles clearly defined in the studio?

"I'm the programmer, so I'll operate the computer. I have a basic understanding of recording live instruments but most of my best work is done in the box twisting sounds and creating a landscape. I play all the instruments, but the real instrument is definitely the Mac.

"Theo writes all the words and used to write most of the melodies, but we often do those together these days. Occasionally, I'll write everything bar the lyrics for a song. Likewise, Theo sometimes writes complete ideas that we just finesse. It's a very evenly spread workload, so much so that I can never usually remember who does what."

"We use Logic, always have, and I know my way around it pretty well. Favourite plugins include the Soundtoys stuff, which is great. I also like Audio Ease's Speakerphone plugin; it's an impulse reverb with infinite possibilities - that goes on almost every track.

"For synths, I like using iZotope Iris, which is basically sound design software. Omnisphere is a go-to for almost any sound, but I'll never use presets. For drums, I like to use Komplete's Battery as a sampler, and I'll get samples from literally anywhere and everywhere.

"Other effects I like that are really cool are the OTT compressor plugin by Xfer Records and Dada Life's compressor saturator called Sausage Fattener.

Is everything done in the box or do you use any hardware synths or outboard gear?

"I use no hardware of any kind, except for some KRK Rokit monitors, a £100 Focusrite soundcard and an sE electronics mic that we've had for years. I guess that might be either very off-putting or very inspiring to your readers.

"Having said that, I've recently got into buying guitar pedals. Strymon makes fantastic pedals, so I have all of those, and Kemper has just given me an amp profiler and a Virus TI synth, which I plan to get into."

A trio of producers were brought in; how did they help sculpt the record?

"Jonas Quant is such a huge part of the origins of our sound. He's as responsible for it as we are. He adds such identity to his sound choices and processing, and we've been through alot together so he was the main producer for this album.

"Stuart Price is also an amazing, uplifting character that breathed a genuine freshness into the process. He brought a crispness and clarity to the few songs he worked on, like Ariel, which is very enigmatic. He was inspiring to be around because he has a very musical mind.

"Every element was considered and he brought in some outside players to help colourise the sound palette.

What about mixing the album, was that all done in the box too?

"Matty Green mixed the whole album. He was Spike Stent's assistant during our first two albums and has now ventured into doing his own mixes. We got a test mix done and it was phenomenal, so we trusted him completely, gave him the whole record and largely stayed out of it - in contrast to the second album which all got a bit OCD on our part!

"Spike had done the first two albums and, with the greatest will in the world, I think he needed a break from us!"

How do you transfer the technology behind your music to your live setup?

"Our MD, Pete Watson, has been with us for years and he takes full responsibility for that side of things. He'll take mix stems and divide them out between the live musicians. It takes a huge weight off my shoulders. He's extremely patient and a very fine programmer. He'll sit for days on end trying to recreate a sound we've made in Logic on his Nord synth.

"For the shows, we expect to have a shitload of lights, maybe a laser or two and perhaps even some video content this time. It's still early days, but we're having discussions and it will be a big show as always."