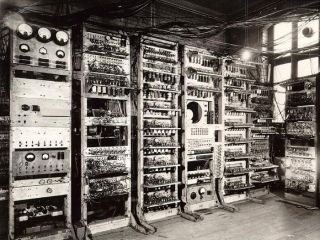 'The Baby' was the forerunner to the Ferranti Mark 1 that was used to make the first computer music recording.

That laptop-based studio sitting in front of you didn't just arrive by accident - it's taken well over fifty years of development work to get to the advanced stage we're at now.

This being the case, MusicRadar thought it was about time we gave you a quick history lesson and briefed you on some of the landmark moments in computer music history.

1951 - The first computer music recording
Believe it or not, computers were being used to make music as long as 57 years ago. The oldest known recording is of a Ferranti Mark 1 computer at the University of Manchester - it played God Save The Queen, Baa Baa Black Sheep and In The Mood. The revolution had begun…

1957 - Max Mathews writes MUSIC
Mathews is often cited as one of computer music's greatest pioneers, and one of his earliest achievements was writing the MUSIC program while at Bell Labs in the USA. This was used to create a 17-second piece that was performed in New York City on an IBM 704 computer.

1982 - Commodore 64 launched
Lots of great development work was done in the 1960s and 70s, but it was when Commodore launched the C64 that home computer music making really got going. It was notable for the inclusion of its SID sound chip, which enabled users to create music using a whopping three channels of synthesis. In fact, the distinctive SID sound is still popular today, which is one of the reasons why you can download C64 emulators for your Mac or PC.

1983 - The birth of MIDI
Standing for Musical Instrument Digital Interface, the introduction of MIDI was of crucial importance to high-tech music makers. This new protocol enabled computers, synths and other hardware to talk to each other, and is still in widespread use today. Without MIDI, computer music history would be very different indeed.

1985 - Atari releases the ST
We might all be using PCs and Macs these days, but back in the 80s, the Atari ST was the machine that every computer musician wanted to own. The son of Atari's CEO had the genius idea of fitting it with MIDI ports, making it the perfect platform for those looking to bring external hardware under the control of their computer.

1989 - Steinberg releases Cubase
Steinberg had previously achieved recognition with the widely used Pro-24 sequencer, but Cubase is the software that made its name. The first version introduced the concept of the 'arrange page' with its vertical list of tracks and horizontal timeline - a design that quickly became the standard interface for all commercially developed sequencers.

Early 1990s - Audio recording arrives
Having previously been used for sequencing external gear via MIDI, computers at last started to become audio recording devices in their own right. Steinberg released Cubase Audio for Mac in 1991, and an even better version for Atari's Falcon in 1993.

1991 - Sound Blaster Pro soundcard
The very first of Creative Labs' hugely successful Sound Blaster soundcards was launched in 1989, but it was the Pro version that added 44.1kHz stereo recording. It was only 8-bit, though; 16-bit recording would have to wait until the launch of the Sound Blaster 16 a year later. This, theoretically, enabled the home computer user to record at 'CD quality'.

1997 - Virtual Studio Technology
With the launch of Steinberg's Cubase VST, it became possible not just to record multiple audio tracks on a computer, but also to process them with plug-in effects (previously, external hardware had been required). Other software developers soon started to equip their products with similar functionality.

1999 - The first plug-in instrument
Steinberg's commitment to innovation was demonstrated again when it released Cubase VST 3.7. This gave us the option of plugging software instruments directly into the DAW - something we all take for granted these days - and came with Neon, a very basic analogue-style synth. A torrent of commercial and freeware instruments soon followed.

2000 - First version of Reason launched
Going on to become one of the most successful music apps of all time, the way Reason was presented - a virtual rack of recognisable studio gear - made even those who were sceptical about the potential of computer-based music production sit up and take notice. Suddenly, everything could be done in one application.

2001 - Ableton releases Live
Live broke the mould when it was released, and quickly made both users and developers realise that there isn't just one way of making computer music. It looks and feels like no other software on the market, and is now used by musicians of all sorts around the world.

2008 - Another revolution?
Music software developers continue to push the boundaries - Celemony has developed new technology (Direct Note Access) that enables you to edit individual notes in mixed-down audio files. Meanwhile, new music applications are being released for handheld devices such as Apple's iPhone and Nintendo's DS. The future looks bright…