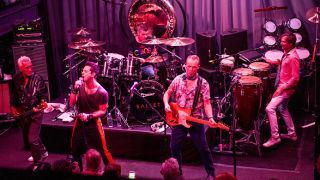 “We’re very excited about the future,” says Gary Kemp, looking ahead to what the coming year brings for pop survivors Spandau Ballet.

The multi-million album shifting band are back with a new frontman, as Ross William Wild has stepped in for original vocalist Tony Hadley, who stepped away last year.

“With Tony, we had our past with the court case,” Gary explains, referencing the royalties disagreement that dogged the band after their early ‘90s split.

“That was always there for him. It was the elephant in the room. As much as we enjoyed playing, it was blunted by various things. I don’t think Tony could ever get away from that. Working with someone like Ross who is fresh to it is just so refreshing.”

It’s not just Spandau that Gary has on his plate. He is also in the midst of a run of dates with Pink Floyd’s Nick Mason, performing a slew of early Floyd tracks in the US and Europe.

During a rare slither of downtime, we caught up with Gary to chat new beginnings, vintage gear and channelling Syd Barrett.

How did you find Ross?

“We looked at about a dozen people. Most of them were coming from musical theatre - we wanted someone who was already successful in their career. Ross has been very successful in musical theatre; he did We Will Rock You and all kinds of things. He was actually playing with my brother at one point as well.

“It was by coincidence that he was suggested to us. I called my brother and sent him some footage of Ross and my brother said, ‘Wow, I know this guy, he is amazing!’ We got him in front of the band and it all worked. We spent some time with him and then we did a friends and family presentation to find out what they thought and everyone dug it.

“The first song he sang for us was Through The Barricades and it gave me goosebumps. He told that story like I had never heard it before. He came in fresh to the material and he hadn’t been singing it for 30-odd years; it was a real bonus and he has this freshness about what he does.”

Was it a case of finding a frontman that worked well with your style as a guitarist and songwriter?

“The songs that I write for the band are quite dramatic. I don’t think that is necessarily because Tony sang them that way; I just think that is the kind of songs that I write. Any singer coming into the band had to have those dynamics. They also needed a big voice, something with some gravitas. But also not someone who necessarily sounded like Tony. We didn’t want to find a guy from a tribute band.

“Ross is creative as well: he plays guitar, he has written songs, he has dabbled in the rock world and has been very successful in the theatre world. One of the funny things people were saying was that he is 28 years younger than us. I thought that was laughable, like there is a rule that all band members have to be the same age. When did that happen?

“Look at a football team: you can have a young striker and then an old guy in midfield. When you go see a play you have different actors of different ages, so it is absolute bullshit. The funny thing is that he doesn’t make us look older; actually, I think, he makes us look younger. We are full of vitality with him on stage.”

Do you have plans to write and record with Ross?

What gear will you be using on these dates?

“I play through a '71 100-watt Hiwatt head and cab. I play clean, and you can get a clean sound at high volume with those old Hiwatts. The sound is just incredible for pedals.

“I use a few Pete Cornish pedals - I have used him since the very early ‘80s. I really like Pete’s own pedals so I have a lot of those within my 'board. I have various compressors as well, and then I build around those. I use a lot of Strymon for all of my modulation, delay and reverb. I have a second board with a lot of Strymon, and I have a Disaster Area MIDI to step up and down through the Strymons. I don’t use a looper- I do dance around on my feet quite a lot and I like that. I like doing that and I have quite a good memory for what needs to be on at what time. With the Hiwatt you don’t get any overtones; it's beautiful.

“Guitar-wise, I have always been mostly a Strat man. I have a Les Paul, and they suit certain gigs. When I play with Spandau, I am mostly on a 1979 Strat. I have gigged that a lot over the years and I have put different things on, and that was the guitar I wrote and played Gold and True on. There’s also a Schecter that I had in the early ‘80s that I used at Live Aid. I still use that one - it has humbucker pickups.”

You’re also touring with Nick Mason; does your gear change a great deal between gigs?

“When I work with Nick Mason, I use a ‘71 Telecaster. I go for the early Syd Barrett sound on that and then I move onto a Strat for some of the later stuff. The Strat I use with Spandau is an Eric Clapton prototype. I was given it in the mid-‘80s. It was sat in a box for ages, but it has a great cut for clean, jangly sounds. For a lot of my Strat work on Spandau I tend to play a lot between the back two pickups for a slightly out-of-phase sound. That suits the sound of that period.”

How do you stylistically approach the Nick Mason gig?

Looking back across your career, how has your approach to writing changed over the years?

“Over the years, I have gone back towards writing on the piano. I tend to find a lot of the songs on piano now. I bought a beautiful Steinway that was at Abbey Road [studio] 2, so there are a few ghosts in that piano, and I enjoy tweaking those out. But then sometimes a song might come out of me sitting blankly with a guitar and some chords just come out.”

Looking ahead, what is coming for Spandau?

“It might take time to get back to the arenas, but we will get out there and play and we leave an impression on people. We are never the band that people expect us to be live; we are always much better!”