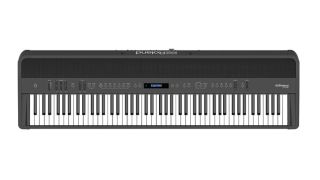 For my out-of-town corporate gigs, I’ve been renting Roland RD-800 stage pianos. Not only does every rental company have one, the RD-800 sounds terrific even in mono, its controls are obvious and well-lit, and you could probably drop it off the stage and it would still work. It’s an industry standard.

But I imagine the visionaries at Roland have been saying to themselves, “What if we took the coolest RD-800 features and built them into an instrument with a superior internal stereo sound system, added Bluetooth functionality, and priced it a few hundred dollars less? Would consumers like this?”

After spending a delightful Christmas gigging season with the FP-90, I’d say “You betcha!” This is definitely a performance keyboard that will soon light up the eyes of music directors, teachers, singer-songwriters, performers, and artists-in-training because it’s an all-in-one product that gets the job done.

Plus, Roland threw in a couple of nice surprises.

The FP-90 is sleek and matte-black with sophisticated, slightly recessed buttons that beg to be touched (and some of which light up when you do). They’re center-clustered around an ample LED screen that comfortably supports all the information you need, Split, Dual, Transpose, and other data—at a moment’s notice on a dark stage.

The keyboard’s eight recessed faders are smooth-throw for reliable incremental adjustment, and the three EQ faders are center-dented for a quick return to your flat-point. The other 25 buttons cover the controls you would expect—Split/Dual, Transpose, Category Selection, Data Entry, Recorder Controls—and a couple you wouldn’t, such as internal song volume and the digital effects for the external microphone input. (More about that in a moment.)

Surprisingly, the unit powers up in less than two seconds, which is much faster than any other keyboard I’ve reviewed; it really raises the bar for this category of instrument. Moreover, the FP-90 action is effortless, and for this product Roland has added the PHA-50 Wood and Plastic Hybrid Structure with Escapement and Ebony/Ivory Feel, which provides a subtle yet athletic touch that brings out the best in both their acoustic and electric pianos. It also seems as if they have put in long nights on velocity mapping to make the playing experience so consistent across the sound gallery.

The Bluetooth connectivity handles MIDI and audio, so you can expand the instrument’s capabilities to include app-based features such as rhythm patterns and auto-accompaniment. Or pair it with your smartphone to turn the FP-90 into the world’s handsomest boombox.

The FP-90 provides a full complement of connectors: MIDI I/O, USB B (for computers) and USB A (for a memory stick), TRS ¼" stereo outputs, a miniature stereo input for your mobile device, and two headphone jacks—1/4" and 3.5mm—on the front where you can easily get to them.

There are three pedal jacks (Soft, Sostenuto, Damper) and you would be wise to invest in Roland’s KPD-90 pedal board, because the two left pedals control some important functions. For starters, you can use them to control page-turning if you pair the FP-90 with a Bluetooth-linked app that has this functionality. You can also assign one of these pedals to step through Registrations, the multisound presets that let you seamlessly prep a set’s worth of material. But that’s just the beginning.

The Center pedal can be assigned to control pitch bend (there is no joystick or mod wheel on the FR-90), vibrato, and the rotary effect on the organ sounds, among other things. You can even pop an expression pedal into the center jack for global volume control.

One of the welcome surprises on the FP-90 is the 1/4" microphone input and gain knob, so you can sing through the FP-90’s amp and speakers. What’s more, there is a dedicated Mic fader for mixing your vocal level, and DSP effects to dial in: a Compressor; a Doubling effect, that has too much pitch variation for everyday use; and Echo, which is actually a good, short reverb. These last two can also be switched on and off using the centre pedal.

While most digital pianos employ heavyweight sampling to re-create the acoustic piano sound, Roland took a different approach some years back with its flagship SuperNatural piano technology. Rather than recording thousands of individual variations on played notes, releases and other noises the instrument makes, Roland uses physical modeling to create the sound. The result is an uncommonly smooth and authentic piano tone with some uncommon features. For starters, the polyphony is nearly limitless. You can do pedal-down glissandi forever and never run out of notes. Also, you’re able to customize the piano’s realism in ways that are different from traditionally sampled instruments.

For instance, you can select from seven lid positions. I wouldn’t say that they sound exactly like you are raising or lowering a piano lid, but it does change the piano tone in subtle and appealing ways. And there are many more parameters, such as 10 Key-Off-Noise settings and 10 Key-Off-Resonance levels. You can also dial in Cabinet Resonance, Soundboard types, and a Duplex Scale that lets you tweak the levels of sympathetic vibrations. They all enhance the instrument’s timbre palette is musically useful ways.

There are 13 piano and two quality harpsichord presets that will cover all your ballad, rock, and old-timey needs. And the Ambience button enriches the piano’s authenticity with a moody reverb presence. You can crank up Ambience on any sound, but it particularly illuminates the pianos and EP’s.

Roland’s electric pianos are always fun and funky, and this 16-member batch is no exception. From the 1976 Suitcase Rhodes to the wonderful Wurlys (Model 200 et al), you may get lost in your inner Billy Preston. My front-runner is the VR EP 1, which has an abrupt velocity jump from mellow to wicked but is so funky and physical that you could be tempted to abandon exploration right there, but don’t. Visit Registration 3-5 SA-EP and swoon in the lushness.

The 15 organ presets are equally rich and complex. And while you wouldn’t want to live there all night, it would be a joy to play on the one or two organ tunes a set that most of us are asked to do. There are a few righteous church tones and an assortment of clonewheels that you can easily step through because Roland has taken the time to balance the volumes of all their presets. Be advised that when you step into the Registrations from the Tone presets, the volume bumps up and you have to make a quick two-finger adjustment to the Part faders.

As you’d expect in an axe costing well over a grand, the Strings, Pads, and GM assortment (more than 270 additional tones without much fluff) are comprehensive and include a few hidden gems, such as the one called Harpiness for your angelic arpeggios, as well as some recording-worthy drum kits.

The FP-90 has two 2-way, bi-amped speakers (25W/5W per side) built into the top of the console, capable of 107 dB of clean, solid amplification. I took it out on a couple of under-a-hundred-person gigs (one going through a pair of Barbetta 41c’s and the other through Yamaha DXR 10" P.A. speakers) and tried playing a song with just the built-in speakers. Even though the keyboard is louder than many digital pianos, you still need the beef and directionality of a separate amp for the sound to reach the back seats. But the onboard sound system is perfect for choral support, rehearsals, teaching, and gigs in small venues.

And here’s something for the singer/songwriters: Let’s say you’re on one of these intimate gigs and you’re killing like never before. You can plug in a mic, set your levels and effects, and record every song as a 44.1kHz, 16-bit WAV file. Although this feature isn’t new to consumer-level keyboards (Casio offered it five years ago in their WK-7500 line), Roland has made it easy to use and provided excellent sound quality. I don’t want to oversell, but you can record a whole night’s show on an 8GB thumb drive and have your selected tracks up on SoundCloud before you go to sleep.

The FP-90 is all about Quality Meets Convenience. True, you can get an excellent-sounding, authentic-feeling slab at half the weight and price; this instrument tips the scales at a substantial 52 lbs. But I don’t know of a keyboard that lets you get to top-tier sounds faster, adjust levels and EQ more intuitively, and record a piano/bass/vocal more easily that the FP-90, all without plugging in an amp.