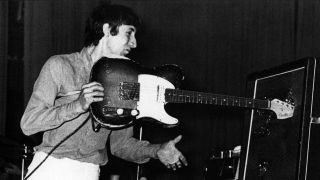 The sight of Pete Townshend smashing his guitar onstage during the climax of a Who's live set, often via an unsuspecting amplifier, is one of rock 'n' roll's most iconic sights.  It's understandable the 74-year old isn't up for repeating those antics these days, but he's confirmed that he isn't ruling a return…

"I haven't smashed guitars for a long time," he told Radio 2, "for me it was an expression of youth. I smashed a guitar on David Letterman and it auctioned for $168,000. I am prepared to smash a guitar for charity."

Townshend's acts of total guitar destruction often took a while to complete onstage - unlike the high-efficient display on the Ed Sullivan Show in 1967 below – but his bandmate Roger Daltrey believes they were more than just youthful expression.

“It's always frustrated me that when you read about the Who, people always wrote about Pete smashing a guitar into an amp,” the singer said during an onstage interview at the International Live Music Conference in London earlier this year.

“They didn't get it. It was not about the visual of it. It was about the sound it made. When Pete used to break a guitar, it sometimes used to take him 10 minutes. It would be a like a sacrificial lamb. This thing would scream. It was an incredible sonic experience.

"The volume would leave us with our ears bleeding. Sometimes we used to come off stage and the ringing in our ears didn't go away for two days.”