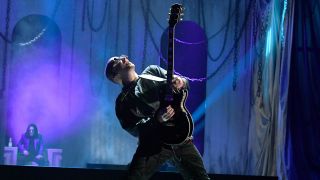 Andrew Watt has come a long way since playing guitar in trio California Breed alongside Glenn Hughes and Jason Bonham in 2013. After pursuing a solo career he's gone on to huge success as a producer and collaborator – working with artists including Cardi B, Justin Bieber, Camila Cabello, 5 Seconds Of Summer and Blink 182.

But he's still a rocker at heart, and it's through his role as Post Malone's producer and guitarist that he's ended up helming Ozzy Osbourne's forthcoming album Ordinary Man. Recent single Straight To Hell (also featuring Slash) marking an impressive return to form for the Black Sabbath legend.

It turns out that song and the rest of the album came together very quickly indeed after he enlisted Red Hot Chili Peppers' drummer Chad Smith and Guns N' Roses bassist Duff McKagan to form Ozzy's studio band alongside him.

"We wrote and recorded Ozzy's entire album, musically, in four days," Watt told Billboard in a new interview. "There was no premeditation. The three of us just got in my basement, put on headphones, looked at each other, and wrote 12 songs, 10 of which constitute the album. It was magic. I don't even remember it.

"Then Ozzy came over to my basement to listen to the music. I played him all 10 tracks at full volume, and at the end he just goes, 'It's cool.' And my heart just fuckin' went into my gut. He was, like, 'I'll call you tomorrow.' Stands up, gets his cane, goes upstairs. I go, 'Oh my God, he hated it! What do I do?'

He calls me the next day, like, 'Okay, so when do we start writing?' I sound like I'm making this up, but he comes over the next day, and we made Ozzy's entire album from top to bottom — all music, guitar solos, all vocals written — in four weeks.

It's the proudest of anything I've ever been, because it brought the 12-year-old kid out of me again. Don't get me wrong, I love the pop music that I make, but this is what I feel like I was born to do: play rock guitar. I got to be fuckin' Randy Rhoads in 2019."

As to how he ended up connecting with Ozzy, it was all down to persistence. Watt helped enlist Ozzy as a guest on Post Malone's track Take What You Want from his latest album Hollywood Is Bleeding.

"I'd never met Ozzy before," Watt explained to Billboard, "but I had met his daughter [Kelly Osbourne]. I told her my idea and asked if she thought her dad would be into it. She's a Post fan, so she's, like, 'Yes, absolutely.'

"Then Ozzy got really sick and was in the hospital, so it was, like, 'He's gonna do it,' but then his health was taking longer, and it was, like, 'Is he gonna do it?' I just kept staying on Kelly and [Osbourne's wife] Sharon, and eventually they told me to come over. So we did it. That experience was incredible."

Ozzy was impressed enough to want to work on more with the 29-year old musician.

"The day after [the vocals for 'Take What You Want' were recorded], Ozzy texted me, like, 'I want you to make an album with me,'" Watt added. "I was, like, that would be amazing, but can I do this? I picked up the phone and called up Chad Smith.

Ordinary Man will be released in January.