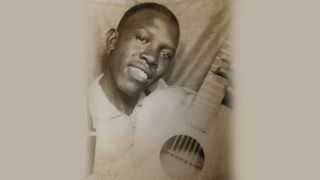 The newly-surfaced photograph said to be of Robert Johnson (Image credit: Hachette Books)

A photograph of legendary blues player Robert Johnson has surfaced and is used for the cover of a forthcoming memoir by his stepsister.

It brings the total number of pictures of Johnson in existence to three. Brother Robert: Growing Up with Robert Johnson was written by his 94-year-old stepsister Annye C. Anderson with author Preston Lauterbach and is said to shed new light on the delta blues guitarist and vocalist's life.

Anderson is one of the few living people who knew Johnson firsthand. This book chronicles Johnson's path to recognition – from his illegitimate birth, to "his first strum of the guitar on Anderson's father's knee" and the recordings that would cement his legacy.

His stepsister shares personal anecdotes in the book, as well as memories of Johnson passed down by members of their family – including never-before-disclosed details about his romantic history to reveal more about the man behind the legend.

But why has this photo of Johnson taken so long to surface?

According to Vanity Fair, the photograph of a smiling Johnson with his guitar was a 1930s version of a selfie taken in a nickel portrait booth in Memphis when he was around 26 or 27, around the same time as the iconic photo of him with a cigarette in his mouth.

It is claimed that it was later stored in a small box that had also held a bottle of sewing machine oil back in the 1930s.

"There was a make-your-own-photo place on Beale Street, near Hernando Street," says Anderson in a excerpt from the book. "I’ve since learned that a man named John Henry Evans owned it.

"The photo place was right next door to Pee Wee’s, the bar where Mr. Handy wrote his blues. One day when I was 10 or 11 years old, I walked there with Sister Carrie and Brother Robert. I remember him carrying his guitar and strumming as we went. You just walk in, drop a nickel in the slot, pull the curtain, and do it. There was no photographer. I had my picture made. Brother Robert got in the booth, and evidently made a couple.

"I kept Brother Robert’s photograph in my father’s trunk that sat in the hallway of the Comas house while we lived there with my mother after my father died. After my mother died, we could only take so many things. I took my photographs with me, wrapped in a handkerchief. I only carried a few belongings to Ma and Pops Thompson’s house.

"When I moved in with my sister Charlyne, I bought some furniture. I stored the photograph, along with others, in a cedar chest I bought. I’ve always had this photograph.

"It shows Brother Robert the way I remember him—open, kind, and generous.He doesn’t look like the man of all the legends, the man described as a drunkard and a fighter by people who didn’t really know him. This is my Brother Robert."

Brother Robert: Growing Up with Robert Johnson by Annye C. Anderson, with Preston Lauterbach, published by Hachette Books, is released on 9 June.