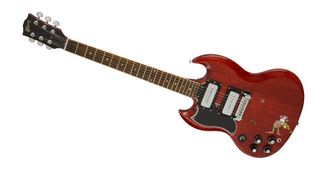 The heavily-modded 1964 model was Tony's weapon of choice with the original Sabbath line-up and can be heard on all of the band's iconic '70s albums.

The guitar will be reborn in a limited run of 50 - including 25 right-handed versions - each of which will be painstakingly aged by Gibson Custom Shop. Obviously, the fiddling monkey motif that gives the guitar its name will feature, and as you'd expect, no detail of the spec, mods or construction has been overlooked, from the zero fret to the stop tailpiece bushings to the legendary lower-powered pickups, which were hand-made in the U.K. by the late John Birch's apprentice.

We don't have a confirmed price yet, but it doesn't sound cheap, does it?

“Recently I was invited to Nashville by Cesar and JC who I must tell you are so enthusiastic and passionate,” said Tony Iommi. “I had the opportunity to go to the factories, meet the people that work there, and I saw how dedicated they all are.

"Gibson guitars have lifted a million times, with the new team being totally involved and that’s what’s been missing in Gibson for a long time now. There’s no stopping them, which is great for all of us guitar players.”

Gibson's Chief Merchant Officer, Cesar Gueikian, said “Having the opportunity to work with Tony to recreate his original 1964 SG is the ultimate honor for all of us at Gibson.”

With any luck, we'll get some quality time with the Tony Iommi "Monkey" Gibson SG Special at NAMM.

Stay tuned to our NAMM 2020 hub for all the breaking guitar news, as it happens.