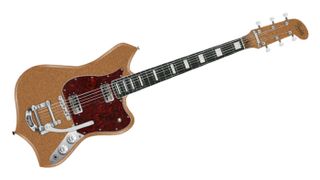 NAMM 2020: Launched in 2018, the Parellel Universe range saw Fender letting its freak flag fly outside of its budget ranges, creating strange hybrids of old favourites and reprising and revamping some of its more unusual back catalogue items. Now the firm is bringing eight new Parallel Universe models to market for 2020.

Fender once would likely have been laughed off the block for reprising a model like the Maverick. Times have a-changed though and, fortunately, the 2020 guitar buyer has a more diverse appetite meaning we get production runs of the Big F's weirdest items. The Maverick (AKA The Custom) looks like it was thrown together from spare parts and, essentially, it was – reworking leftovers from Fender's Electric XII into a six-string format. This reprised version gets treated with a little more respect, with Filter’Tron-style humbuckers, a Bigsby B50 vibrato, a dark ebony fingerboard and a choice of three colours: Ultrabust, Mystic Pine Green and Firemist Gold.

We love the tasteful vintage surf aesthetic of the Spark-O-Matic Jazzmaster. It's not just skin-deep either, that body is a three-piece ash/mahogany/ash combo, which will have a significant impact on tone. It's loaded with a Seymour Duncan SM-1N and SM-3B Mini-Humbuckers, originally designed as replacements for a Gibson Firebird and routed to a five-way selector. While the age-old Jazzmaster foe - tuning instability - is vanquished thanks to an American Pro Jazzmaster bridge and ClassicGear tuners.

The Strat Jazz Deluxe takes the iconic hardware of the Strat and places it on an offset body. The Deluxe-ness comes courtesy of the flame-maple top (finished in Transparent Seafoam Green), a one-piece rosewood neck, Pro Strat bridge and three Texas Special pickups.

Reversing the trick of the Strat Jazz Deluxe, the Jazz Strat places Jazzmaster appointments –including Pure Vintage ’65 single-coil Jazzmaster bridge and neck pickups – on a Strat body. Like the Strat Jazz, it works surprisingly well, in terms of its appearance. Those are aluminium radio control knobs, while the part that most induces a double-take is a custom Decoboom Streamline Pinstriped pickguard.

The new Mágico looks a bit like someone dressed a Telecaster as a 00s crunk star, but its hard not to be dazzled by its pearloid sparkle. A high-class howler, it has been designed in conjunction with Custom Shop Master Builder Ron Thorn and features a flame maple neck, custom Fender Gold Foil pickups, plus a 3-saddle Tele bridge, on an ash body. Oh - and all the pearloid.

The original mahogany-bodied Troublemaker Tele was so-called because of its obvious Gibson-like design inspiration. Here it gets outfitted in 'Deluxe' fashion, adding a Bigsby vibrato in the process.

As above, sans Bigbsy and black finish, the Troublemaker Tele Deluxe offers push-pull volume controls to access coil-taps on both of its Custom Double Tap humbuckers.

The Uptown Strat taps a little Gibson DNA in its double humbucker and four-pot pickup control setup, not to mention its mahogany body and neck. Like the Troublemaker Teles, the humbuckers can be coil-tapped for added tonal flexibility.