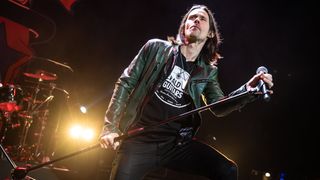 Best of 2019: “I really enjoy talking shop when it comes vocal stuff,” smiles velvet-lunged virtuoso Myles Kennedy. It comes as no surprise - he is, after all, the busiest and arguably best singer in rock right now.

Kennedy is currently on the road with Guns N’ Roses hero Slash and his Conspirators, having completed the cycle for last year’s jaw-dropping Year Of The Tiger solo debut.

Then, of course, there’s that impending sixth Alter Bridge full-length, loosely slated for an October release. For the Boston-born Spokane-based singer/guitarist, who once famously auditioned for some tiny band called Led Zeppelin, it’s crystal-clear the music never stops...

“We’re still finishing up the new Alter Bridge record,” he says, calling from a hotel somewhere in between Germany and Switzerland.

“On this current run with Slash, if I haven’t been on stage or doing soundcheck, I’ve been in my hotel room and dressing room writing. I know [Alter Bridge guitarist] Mark Tremonti has been working really hard, too... we probably have about 16 demos ready to go and we’ll see what ends up making the cut. It should be fun - I’m excited about getting this one in the can!”

One can’t help but wonder if working in all these projects over the years has required different approaches with his melodies and, ultimately, his vocal cords. As it turns out, it wasn’t so much the varying creative pursuits and applications of his voice as it was his own personal evolution that brought about change.

Time is what has given the singer enough distance to appreciate every facet of the instrument he was born with, eventually leading to less emphasis on the sky-scraping highs that got him noticed initially…

“It’s a good question,” says Kennedy, disarmingly gracious and humble for a musician of his stature, naturally blessed with one of the most soulful rock voices this side of Chris Cornell.

“As the years have gone on, I feel like I’ve been lowering my voice. I find it a little more pleasing, at least to my ears. I’ve started embracing that lower register, though when I was younger it was more about how high I could go.

“I think that’s the thing for a lot of young singers; if you have that range, you tend to jump up a lot. Because, for one thing, it cuts through! Back in the day, before in-ear monitors, I would be rehearsing with bands in these rehearsal spaces with crappy PA systems - singing high was the only way to be heard…”

Interestingly, Kennedy cites David Bowie - undoubtedly the definitive master of reinvention - as someone who learned how to express themselves in new ways over time. It was the Thin White Duke’s latter output that would help Kennedy understand there’s a time and place for everything…

“Eventually I noticed some of the guys I grew up listening to, like David Bowie, have done a similar thing,” he continues.

“If you listen to those early records he was up high and then, as time went on, he started to embrace his baritone side more. When I realised that, I thought, ‘Hey man, singing lower could actually be a good idea!’

“Of course, I still like to hit that upper register sometimes, just to punctuate things, but when you’re using it less, there’s definitely more of an impact when you do go for it.”

Some of these seeds were also sown two decades ago while [early group] The Mayfield Four were recording their sophomore album Second Skin with producer Peter Collins, who had previously worked with Canadian progressive rock masterminds Rush.

“Peter said some really interesting things having worked with those guys in the past,” admits Kennedy. “He actually told Geddy Lee the same thing he told me, to try and get him to consider singing in the lower register. That way when he went high, it would have a certain effect. It really stuck with me - I thought that story was cool!”

Here, the most in-demand singer in rock gives MusicRadar five vocal tips to help hit those notes and get the most out of your range…

“It’s funny you mentioned Chris Cornell earlier, because I learned about the Bel Canto technique indirectly because of Chris.

“I used to be managed by his ex-wife, Susan Silver, while I was in The Mayfield Four. She said I should check out this guy that Chris studied with, a teacher called Ron Anderson that lived down in LA. He taught the Bel Canto method, which is an opera technique that’s been around 300 years, so it’s tried and true. It’s all about bridging the gap between your chest voice and your head voice, to the point where you can’t hear it.

“It takes a lot of practice and discipline, as well as retraining how you approach things in the studio or in a live context. If I hadn’t learned that, I don’t think I’d still be singing… I probably would have blown my voice out years ago. It was probably the best money I ever spent as a musician, taking those lessons!

“In terms of vowels, I find the A’s and Ah’s very easy. But as a writer, for some strange reason, I tend to gravitate a lot more towards I’s because they have this piercing intensity. But I find E’s are the difficult ones, because I try to keep them really bright and punctual.

“Take the word ‘eat’: I focus more on the E than turning it into a heavy, weighty sound. As I get higher, I try to keep it light and not press down too much in order for it to ring out. That’s probably the most difficult sound for me to sing.”

2. Learn how to support your middle/mixed voice

“Say for a song like By The Sword [originally sung by Wolfmother’s Andrew Stockdale], which gets pretty high, I’ll use my head voice for that.

“There’s a trick I learned many years ago - which is where you make sure you support it with your diaphragm and you raise your soft palate in such a way so the higher you get, you change the placement. You can almost mimic the sound of a chest voice so it doesn’t sound like a full-on head voice; there’s more of a loud intensity to it.

“To try and sing that stuff in my chest voice would be virtually impossible. It might be cool once in a while, but you’ll shred your vocal cords if you try to sing that high using chest all the time.

“There’s a trick you can do right at the break between chest and head - mine is around an F# or A above the staff - that’s where I switch to the nasal part of my mouth. I push out my diaphragm to give things a little more support, then lunge into my head voice raising that soft palate as high as I can. Just like I’m yawning - that’s the analogy Ron taught me - it’s like yawning as much as you can.

“After a long time, via lots of scales and arpeggios, it finally started to sink in so I could make it more consistent.”

3. Don’t overdo it on the warm-ups

“I used to warm up a lot more than I do now. 15 years ago, when I first started with Alter Bridge, I remember warming up for around an hour. Then when I started playing with Slash, I would do 45 minutes to an hour. After a while, I found that I would burn my voice out a little before the show had even started!

“So now I do about 10 minutes, working on things that will help the most. The lip burp, that motorboat ‘brrr’ sound is a big one. Then there’s the ‘hrrrr’ sound with the tongue - sorry if you have a hard time conveying this to your readers, haha - but those are the best ones to get the blood flowing. I try to keep it light.

Myles Kennedy’s top 5 tips for guitarists: “If I can do it, you can do it”

“The last thing I generally do is the word ‘ga’ up and down in scales through my register, raising it from the lowest notes, through the break and then as high as I’m comfortable with. Before the show, I don’t want to push it too much; I just want to open it all up.

“There’s a series of about seven or eight of these I do over 10 minutes and that seems to get me warmed up enough. If it’s feeling tight for whatever reason, like I’ve been struggling for some reason, I’ll warm up a little longer.

“When we came to London in February, I was just getting over a bronchio thing and my cords were swollen - so I had to take the time to do a few more vowels. I got this tape from Ron about 20 years and I still use it to this day religiously. That’s my warm-up. He has a website and a phone app called Voixtek that I must recommend. The guy is an amazing vocal coach.”

“It’s funny, because certain songs, like The Call Of The Wild, don’t offer much space to breathe in certain parts. I think it’s the chorus going into the bridge - even though the chorus isn’t that high - there are a lot of notes which means I go into the bridge thinking, ‘Oh man, I hope I can find a little spot to take a breath!’

“That breathing is so important to the Bel Canto technique - you live and die by that placement and how hard you are pushing. You need to be thinking about what’s coming next. It’s a bad analogy, but don’t blow your wad too soon… you really have to pace yourself.

“I try to take a very big breath at time to make sure there’s plenty in my diaphragm and I have that headroom. It’s important to be conscious of that. As a performer, it’s important not to jump or run around too much and get so winded you run out of steam mid-phrase.”

5. Don’t be afraid to play it safe

“You know what’s interesting, on this tour I’ve become aware of how hard the verses are in Anastasia. It’s usually the last song in the set, so we’ve been at it for two hours and it can feel like a real challenge. I might weave around with the melody a little - I’d rather sing on pitch and lower a word or two than go for the recorded melody and end up flat.

“When your voice gets tired, that’s what happens. You start hitting everything below where it should be because your muscles are saying, ‘Man, I’m tired’ That’s definitely the hardest part of the Slash set. For Alter Bridge, I’d say Ties That Bind can be pretty damn challenging.

“It all boils down to what part of the set it is, how loud we are on stage, how hard I’m pushing and if I’m getting over a cold or something… there are so many different variables that can affect whether something is difficult or not.

“Some nights, the songs are very easy. We played Berlin not long ago and it was an effortless show. Other nights, those variables don’t go in your favour and you have to work around them. That’s what I’ve learned after all these years of touring: don’t get down on yourself if things aren’t operating at 100 per cent. Just do your best and don’t be afraid to weave around with the melody if you need to.

“That’s something Freddie Mercury would do brilliantly… watch those classic performances and if his voice was getting tired, he’d improvise a bit and actually that can sound really cool- people dig that, too. The most important thing is not to stress yourself out too much!”