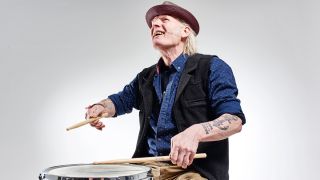 When we spoke to Martin Chambers, the Pretenders had just finished a three-month US tour opening for Stevie Nicks.

A self-taught drummer, Chambers accepted his first paid gig before he even owned a drum kit.

“I never thought drumming was anything that you needed a lot of skill for,” he says. “I suppose I could do it instinctively, hear something and reproduce it. Basically within a week of Are You Experienced?, the first Hendrix album, coming out we were doing three or four songs off that. It was a great learning curve and it moved on from there through blues bands, progressive rock, then Jim, Pete, Chrissie and me.”

Chambers joined the Pretenders in 1978, playing on a string of hit albums and singles, but success came at a high price when guitarist James Honeyman-Scott and bassist Pete Farndon died less than a year apart from drug abuse.

Chambers stayed with the band until he was fired in 1985 during the recording of the album Get Close. He re-joined in 1994 and has been there ever since, although he hasn’t appeared on a Pretenders studio album since 2002’s Loose Screw. Along the way, he’s worked with Paul McCartney, Mick Ronson and Dave Stewart and the Spiritual Cowboys.

He’s been lifelong friends with Mott the Hoople, opening for the band with his pre-Pretenders prog rock band Karakorum, and in both 2009 and 2013 Chambers filled in for ailing drummer Dale ‘Buffin’ Griffin. Now he’s writing his autobiography, aptly titled the Last Pretender.

Martin, was the look or sound of the Pretenders shaped by punk?

“No, not in any way, shape or form, purely because Jimmy [James Honeyman-Scott] didn’t like punk in terms of the basic music that was used. It was so basic, it’s just boring. I was looking for something that you could interpret and play and that’s what Chrissie provided.

“She had so much of that first album ready to go in her head and the other critical point was even though some of the timings were strange, she played it consistently.

"You could find the pulse and get it together because you know she’d always play it the same. Like the stops in Tattooed Love Boys, those are on her time, so we could play them perfectly although they may not have been in a straight timeline.

“It’s close to dance music in that respect but dance music is more of a skip. There’s a skip, a swing, and a rock. All these and many more are used with the songs that Chrissie writes. And it’s still the case today. The good bits of being a drummer come into play.

"It’s nothing at all about the punk ethic, it’s more about the musical backing and challenging yourself to be better. We had a hell of a time with Brass in Pocket because we couldn’t really find a bassline that worked, and nobody liked it. We weren’t happy with that and that was a Number One so we knew we were doing something right.”

You went through a tragic time in the early ’80s with Pete and Jimmy dying, did you ever consider quitting music?

“No, we had brought it to a really good place. The unfortunate things happened with Jim and  Pete and it didn’t take long at all for Chrissie and I to say, ‘Let’s go on.’

"We auditioned other guitar players but Robbie McIntosh was the man. We inherited a bass player with him and also a keyboard player, so that came together fairly quickly and I rehearsed that band because Chrissie was busy with family at that time.

“By the time she started coming in to rehearse, I’d beaten out the bad s**t from the rhythm section. Chain Gang came out, then the third album came out, Learning to Crawl, and we went from strength to strength. We had a great summer that touring year of ’84 and then finished up in ’85 at Live Aid.”

“Chrissie wanted to sack me and take charge, that’s about as simple as it can get. I understood that, but the way it was done wasn’t like that. The way it was done was like hacking me off at the knees and insulting me to a point. They didn’t want me there because I’m taking 50 percent. I was sent off to Palookaville.”

When you returned to the Pretenders, was it easy to let bygones be bygones?

”I saw a show, I don’t know what year it was, but it was awful. It was a big place, it was half-full, and it was very uncomfortable for me to watch it. It wasn’t the Pretenders.

"Okay, it’s not going to be Jim and Pete but I felt it wasn’t good. I thought Chrissie was fabulous, her voice sounded great and it just didn’t look right.

“Playing to a half empty place is never good. I felt very sad about it. It was in 1993 I think, a call was left on my answering machine with Chrissie saying, ‘Just wondering where you are, Martin. Give us a call.’

"I was out in the country, so when I got back there were two messages, the second one was, ‘Give me a call, Martin, I haven’t heard from you, I’m a bit worried.’ So she was missing me.

“I think logically she was missing what I do, between her and me when we play. I know I’m not a rhythm section guy, I’m a song player. That reaction, which happened the very first time we played, this pull and push from the rhythm of her right hand on the strings and the way I play, she varies a bit, I try to hold her steady, that’s part of the Pretenders backbone.”

Push and pull - do you play behind the beat?

“This is what I mean about being a song player. What’s needed? Sometimes the last thing you want to do is play behind the beat.

"Excitement generates energy, the tempo of the room is raised, so accordingly the tempo of the band is raised, but you should be aware of it and in control of it, so when you get back to the other part, that’s when you can hit it behind the beat and drag it back into the corral and close the gate.

“You’re creating an atmosphere in a room. It’s not too dissimilar when you record. When you like the songs that you’re recording, you’re giving it absolutely everything and Chris Thomas used to put me through it, man.

"Without waxing too lyrical, part of the job of a drummer is to make moments, those great moments in songs, last as long as possible.”

You’re not on the more recent Pretenders’ studio albums?

“Because the Pretenders were over a very long time ago. I don’t really want anything to do with it apart from doing the live performances with Chrissie.

"I’ve got loads of stuff to do myself, so to just turn up, rehearse the songs for a tour, go and tour and then see you next year, that suits me fine.”

You’re playing tracks off the new album on tour, do you still get to put your stamp on those tracks?

“Abso-f**king-lutely. When we do even a fairly short set with a Stevie Nicks show, we start with two new songs, and the challenge for me is to put my stamp on it, which wasn’t difficult at all, but more importantly to improve the way it felt and the way it looked and just make it cockier and improve on the tracks on the album.

“I think we’ve done five or six from the new material in our own shows and I’m pleased to say we’ve achieved what we needed to achieve there. They’re going down so well in these arenas, it’s amazing.

"We’re playing to a cold audience, they’ve just walked in from the car park, they’re getting to their seats when we’re onstage playing. So we get them, and we get them every night. It feels like a job well done.”

“It takes a degree of commitment and with that commitment is the responsibility to be in shape to play. It’s not very good if you’re going to die from drugs, that’s not going to help the drumming down the road. Stay alive, stay healthy and keep your mind on what you’ve got to do. I managed to do that pretty much.

“You have to be able to perform what’s needed for the songs and when you play Precious I’m not going to tap along like I’m miming. I’m going to play that f**ker down to the ground. That’s what it is. Those early songs, Precious, Tattooed Love Boys, Up the Neck, let the artillery go.”

You have your crash cymbals set up high, is that so you’ve got a good run up at them?

“I have a good run up at them! The bigger places I play, the bigger I play. To have your cymbals just above your drums, for me, it’s nice, it’s good, but I always thought, let’s make the drums bigger.

"The way I chose was to have the cymbals up higher so the journey is that much more. That much more effort is needed but it looks great.

“I talked to Keltner about this and we’re in total agreement - it’s all about that journey. With keyboards and guitars, saxophones and pianos or whatever it is, you’re moving your fingers.

"Pete Townshend swings his arm around a bit but, generally speaking, to play the instrument it’s all right there. With a drum kit, it’s spread about. The bigger that journey, it’s a different feel. Something happens. Those journeys, that’s called feel.”