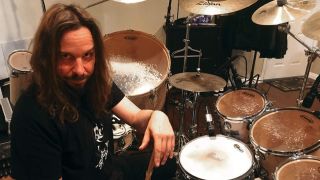 Marco Minnemann is a busy man. He is constantly recording, keeping a full schedule, doing remote recording projects and releasing his own material, including the recent Borrego.

The album includes guest guitarists Joe Satriani, who Minnemann has also recorded and toured with, and Alex Lifeson of Rush. Minnemann is currently working with the latter on music that also features bass phenom Mohini Dey and vocalist Maiah Wynne. The project is being mixed by Rush engineer Rich Chycki.

Marco is also on the new release by The Sea Within, which includes members of The Flower Kings and Pain Of Salvation. And he is in the process of getting his instrumental project, The Aristocrats, primed for a European tour, which includes a UK date.

“It was a Remo PTS kit. When I started playing drums, the first kit we bought cost a few hundred dollars. I don’t even know what it was called. We took it home and took it back to the music store immediately because it was flimsy. Then we bought the Remo PTS instead. That one I had for a few years, just when I started to play drums. My first ‘professional’ drum kit was a Tama Superstar. That was a pretty cool kit. I think I was 12 or 13 years old when I got that one.”

“I did take lessons from a few teachers in my early teenage years to get going. I need to mention Abbey Rader. He was one of my first teachers in Hanover, Germany. A really cool guy, who showed me stick control.

"From there, I started to be more self-taught. I picked up Gary Chaffee’s books and The New Breed by Gary Chester.”

Who did you look up to as a young drummer?

“Simon Phillips, Buddy Rich, Terry Bozzio, Vinnie Colaiuta, to name just a few. When you’re a kid, everything you hear that blows your mind, you want to get into.”

How did you develop your drum sound?

“I’m very ‘OCD’ about getting as good of a sound as possible. I think there are certain tonal ranges that toms ring in the best. You listen to the shell, you mess around with the drum head, make sure you don’t have it too low, but also not too high.

"Then, make sure there is decent attack and not too long of a decay. I also tune in a way that I can form melodies. I have long arms, so I hang the cymbals a little higher. You get a nice separation and no bleed over into the mics from the toms.

"The consciousness of tuning drums and the impact of having a nice sounding drum set is, they eq better. The toms are the mid-range, the kick drum is the low-end, and snare is the high-end. That’s where I’m going with having those things nicely separated. That’s important for a nicely balanced drum sound.”

What is the key to your playing style?

“I think listening is the most important part. I want to complement the music and make it sound nice. Anything else you can do with your technique is beneficial. It’s like a language. The more letters you own, and the more words you know, the more freedom of speech you have and the better your conversation.”

What has been your biggest career highlight?

“I would probably say The Aristocrats. Just because it came out of the blue. The chemistry completely fell from the sky, unexpected. All of a sudden, we had this great bond and toured the world.

"We were successful, the three of us, playing instrumental music, which was weird, but very beautiful. That is an achievement that I am quite proud of.”

What is the key to longevity as a musician?

“Being truthful to yourself and what you do. Listen to your heart and be passionate about things. Try to develop. Keep working, keep doing beautiful things that satisfy you and the audience.”

What’s the biggest on-stage nightmare you’ve ever had?

“I remember this moment, which turned out a beautiful thing. I was playing with Steven Wilson. There was a song off Hand. Cannot. Erase., (Ancestral) where the whole system failed. We played to videos and with a click track because there was a lot of orchestration.

"We had all this stuff going and I ran the computer. I had to start and stop it. We started that song and two minutes in the whole thing started to go out of sync. I had no choice but to stop it. Then, we were looking at each other, Steven and I, thinking, ‘Obviously that thing (the computer) is going down. Can we play the song? Shall we keep going? Shall we stop?’

"I was like, ‘Let’s go for it!’ It’s a really long song and, honestly, it was one of the best versions we ever played! All of a sudden we were not acting like the tiger in the cage. It was great!”

What is your pre-show warm up?

“I don’t do anything before a show. Guthrie (Aristocrats guitarist) and I have the same routine, which is not touching the instrument before the show. It feels fresher. I play every day.

"It would be like dinner before dinner (laughs)! It depends on what kind of song we start with. If it’s a really fast song or really dynamic, I grab some sticks and do some rudimental exercises with hands and feet but that’s it.”

“Once again, listening. Feeling myself into the song. I’m a fast worker. I get arrangements really quick. That’s a thing people like about me. I listen and understand guitar parts because I play myself. I listen to the music and I always try to make it tasteful.”

“Saying ‘No’ to things used to be my biggest weakness. It’s tempting to take all sorts of studio gigs. You have to be conscientious and choose wisely what you play.”

Who do you see as an underrated drummer?

“I wouldn’t use the word ‘underrated.’ There are drummers that could be talked more about. For example, Mark Craney. What a great player that guy was. Barriemore Barlow when he played in Jethro Tull. Heavy Horses, Bursting Out, unbelievable! It’s so musical and beautiful. Everything he plays sounds really good.

"I really like Chad Wackerman. He has such tasteful playing. In my opinion, he gets overlooked. There was a reason why he was the longest Zappa drummer.

"Here’s something that sounds bizarre, but how about Phil Collins? Obviously, he doesn’t need any more praise. He’s famous. But how many people go, ‘Oh, he plays drums also?’ A lot of the younger generation doesn’t even know he’s a drummer.”