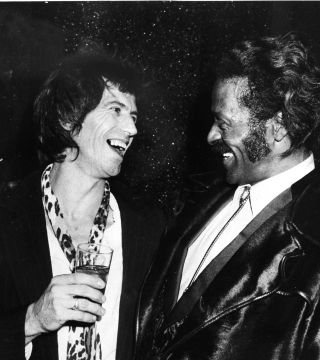 Earlier this week, Keith Richards published a warm tribute to Chuck Berry, who passed away aged 90 in March.

The open letter, which appeared on Richards' Facebook page beneath a brief clip of the two stars appearing in concert movie Hail, Hail Rock 'n' Roll, moves from an affectionate portrait of Berry's spiky but 'essentially warm hearted" character to detail his life-changing, "glorious Technicolor" impact on a 15 year-old from Dartford, England. It's lovely, and loving, stuff...

"To Put Chuck Berry into words! That is a task.

"If I flip the coin and wonder how the fuck Chuck Berry reacted to me when he first heard my feeble efforts to spread his groove, my guess is a disdainful chuckle and then a gleam as he imagined the royalties roll in.

"Then a realization that his music was far more important than he had ever imagined. (He did thank me for that). And, let’s face it, Chuck had imagination. Just check the songs. All is revealed on “Monkey Business”, “Wee Wee hours”, “Jo Jo Gunne”, “You Can’t Catch me”, “Childhood Sweetheart”… let alone on “Johnny B. Goode”, “Little Queenie” or “Around & Around”. It goes on and on: “Let it Rock”, “Sweet Little Sixteen” or the heartbreaking “Memphis.”

"You have to hear the original recordings to get the whole picture. Let us make no mistake about him. His inventiveness, natural exuberance, brought all of the variations of this vital music together, be it Rockabilly, country, R & B, Jazz or pop. His own roots went wide and deep, even back via Louis Jordan to the big bands. But we’re talking about a complicated and thoughtful man here.

"Listen to “No Money Down”, the incredible “Bye Bye Johnny” with its reversed riff. As a lyricist his imagination, the themes and subject matter took songwriting to a level yet to be matched. Who else could come up with “Too Much Monkey Business”. Throw in as well “No Money Down”, “Memphis, Tennessee" and “You Can’t Catch Me” … a song that John Lennon reworked with “Come Together”.

"And then there were the guys he worked with; Johnny Johnson, on piano, an icon of boogie and feel; Willie Dixon, the BASSMAN!; Freddie Below and Ebbie Harding on drums.

"He was a very guarded and private man, essentially warm hearted, though he spent a lot of time disguising that fact which could give the opposite impression. Hard to know, moody, but when you got him at the right time, beautifully friendly.

"It’s hard to find the words to describe his contradictions: warm, infuriating, moody, disarmingly charming, angry. He once gave me a black eye for daring to touch his guitar. Quite Right!!! I called it Chuck’s greatest hit.

"At the moment I sense the same feeling I had at 15 years old when Buddy Holly died. A sickening thud to the guts and a feeling of losing a member of the family. For me the world went from black to white to glorious Technicolor when I first heard “Little Queenie”. There was no doubt in my mind: It was obvious what I had to do and I haven’t changed since. The effortless ease with which he laid down the rhythm makes a mockery of countless grimacing lip biting agonizing imitators.

"I’m still working on it.

"He brought joy to us; the feeling for a fifteen year old guitar player that there was more to life than seemed possible. With the exuberance, he brought a casual ease and a rhythm that makes bits of your body move you didn’t know you had. In essence, he was a revelation. I ain’t 15 no more but the joy remains."