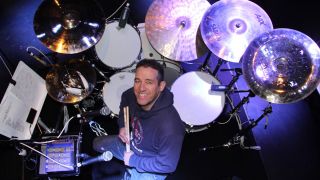 Across two performances at last year's London Drum Show Masterclass and Education stages, Rascal Flatts drummer Jim Riley demonstrated why he is regarded as one of the most versatile players in the business.

As well as his main gig, Riley has a startling array of TV credits, from The Voice, American Idol and Dancing With The Stars to The Grammys and the American Music Awards. He is also a highly-rated educator and clinician and it was the art of the clinic performance that we wanted to ask him all about.

What is the key to a great clinic performance?

“I think its important to strike a balance between entertaining the audience and making sure they all leave the event with information that will make them a better player.

Are there any clinics that you have seen over the years that stick in your mind?

“Definitely Louis Bellson and Ndugu Chancler in 1985. I had only been drumming a few years but I was consumed with becoming a better player. Watching Louis, I knew I was seeing a living legend in action. Ndugu was funky and inspiring. He and I spoke at PASIC last year and he remembered that clinic in Boston Massachusetts very well.”

You’re also an in-demand drum teacher. What are the biggest lessons you’ve learned from being an educator?

“I think its ability to be able to convey an idea in multiple ways. All students learn a little differently from each other and you have to recognize when you are trying to convey an idea sometimes you have to back up and come at the material from a different angle to connect with them. Some concepts come across better as notation to one student and much better to others if you play it for them.

"The old saying those who can't do, teach is not a good model. When I was finishing up my Music ED degree my advisor asked me where I saw myself in five years. I told him pursuing my career as a player. He asked me why then did I bother to get a teaching degree and I told him I wanted to be the type of teacher that could say, ‘This is what I think you should do,’ and the students would believe me because they know that I have actually been a working professional.

"So as my career as a player solidified I got back to teaching and it is still one of the things I love most to do. When I first got back into teaching, the Rascal Flatts guys asked me why I was doing that as if to say, ‘We pay you enough that playing with us is all you would need to do.' I told them I do it because I love it...

"Teaching for me has never been about the money. I just want to help people realise their dream of being a better musician.”

How important has your musical education been to you being able to realise your own dream?

“I would say very important. Studying music theory made my transition moving to Nashville a lot easier. In Nashville we use a system of charting called The Nashville Number System. While the NNS itself has only been around for about 60 years, the concepts that it’s based on are hundreds of years old and ones I studied in college.

"I actually wrote a book on the subject called Song Charting Made Easy which was published in 2010. There is an old joke, 'What do you call a guy that hangs out with musicians? The drummer...

"I have always tried to be the antithesis of that instead striving to be the best musician on the stage. When I started with Rascal Flatts in 2000 I was actually the last of three musicians hired.

"In 2001, they called me and said while they were not making any personnel changes, they would feel more comfortable if I would take over the duties of Band Leader/Musical Director for the group.

"I think they understood that not only did I have a passion for their music but I also possessed the musical IQ to lead the other sidemen. The educator in me definitely shows up when we hire new players and its my job to get them comfortable with their new role.”

What is the key to being a good student of the drums?

“I think there are a few key factors to being good at anything. The first is that you have a passion for it.

"Music teachers should make sure to steer students to instruments the student feels passionate rather than trying to fill a need for their program.

"Another key is consistent practice. It's much more beneficial for a student to practice even just 15 minutes a day rather than an hour once a week. Lastly I would say make sure that your teacher shares your goals.

"You want to have a teacher that will focus on fundamentals and help you accomplish your short term goals as a musician.”