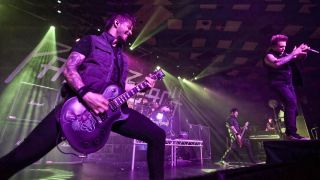 Believe it or not, but it is a whopping 17 years since Papa Roach dropped smash album Infest.

The record, the follow-up to the band’s 1997 debut, immediately struck a chord within the then red-hot nu-metal scene.

In the two decades that have followed, many of their peers within the scene have drifted into obscurity, but Papa Roach are still very much around, and are now back with ninth album, Crooked Teeth.

Crooked Teeth sees the band join forces with production duo RAS and Colin Brittain, and guitarist Jerry Horton thinks it was a match made in heaven.

“They had huge energy and enthusiasm,” he says.

“They also had an innocence when it came to rock. RAS is not really a rock guy, so they were putting out raw emotions and not really qualifying them in terms of what a rock guy would say or do.

“That allowed us to be ultra-experimental and not care about radio singles or what might be offensive to somebody - we were just really excited about making music.”

Ahead of the album’s 19 May release we spoke to Jerry about the making of the record, how Papa Roach have survived 20 years and why they’ll never remake Infest.

You’re 20 years and nine albums in now; that’s quite the achievement…

“We are so fortunate to still be doing this. It’s funny, we still get the odd response of, ‘Oh, you guys are still a band?!’ That’s to be expected; we’re not a pop band. This is album number nine and we’re still doing it and we still love it. We still like each other, so that’s good.”

A lot of bands have come and gone in that time - why have you lasted?

“I think on one hand our evolution has helped. On the other hand, the fact that Jacoby has been very personal and forthright in his lyrics has helped. He comes from a very honest place. It’s using music as a kind of therapy and that speaks to people. We’ve had a lot of people say that their music has helped them through really dark times. We also pride ourselves on our live show and give 100% every night.”

Is helping people in that way the ultimate accolade for a musician?

“It really is. It’s one thing for someone to say, ‘Oh, that’s a really cool riff,’ but to have an effect on somebody’s life and to be there for people is gratifying on a larger scale.”

How did you approach the writing of Crooked Teeth?

“We did quite a bit of writing in our studio for a couple of months. We worked up some demos and didn’t end up using a lot of that stuff. We weren’t clear on which producer we wanted to work with, so we decided to do some co-writing sessions to feel out different people’s styles.

“The first person we tried was Jason Evigan. He is a pop producer but he used to be in a band called After Midnight Project and we had taken them on tour quite a few years ago and we loved their music.

“We got together and wrote the song Born For Greatness. We enjoyed that so much because he is not a rock producer and it’s not a typical rock song. We realised that we needed to go with somebody who is more on the pop side because we had done the rock thing for a long time.

“We had been doing it long enough to know what our identity is but at the same time we look up to bands that have changed over the years, bands like Faith No More and the Chili Peppers.”

How did you settle on RAS and Colin Brittain?

Did having producers more readily associated with pop have a big impact on your riffs and tone?

“RAS is the vocal and lyrics guy and Colin is the music guy, and he does come from a rock background but he is from Nashville so he has a wide range of styles.

“In terms of recording and tone, we saw eye to eye. We started to use an amp modeller but then decided to go for a real amp. We dialled the tones to be appropriate for the song. It was never heavier than necessary because when you do that it starts to get muddy. We didn’t do too many layers; we only put in stuff that was really necessary and helped the song. “

What gear were you using in the studio?

“We had a general sound that we wanted to get, and we chose a Friedman amp because it has that hot-rodded Marshall tone and we could dial it back if we wanted to or we could really push it. For the first few songs we had it on 10 all the way. We were borrowing somebody’s cabinet and we blew it up because we were running it so hot. After that we dialled everything back a little bit!

“We also had a Bad Cat 20-watt and a tiny Hughes & Kettner five-watt. For pedals, we had a wide range of stuff. We used an old tape echo kind of as a preamp. That was kind of odd, but it added a really nice compression to the sound.”

Is it difficult to stay fresh with your riff writing after nine albums?

“There’s three or four people in the room coming up with riffs, so that helps. This time as well we decided to go crazy and not worry about radio singles, and that helped as well as feeling the energy that RAS and Colin had. We fed off each other.

“We looked back to the punk side of how we used to be rather than metal. I feel like this album is going to really get noticed by people that haven’t listened to the band in a long time. Obviously, it is always the hope to make new fans, but we also hope to bring some of the old-school fans back in because this album is like a mix of Infest and Getting Away With Murder. It has the energy and innocence of Infest along with the melody of Getting Away With Murder.”

Does that need to appease old fans but also attract new ones sometimes play on your mind?

“I feel like it is subconscious. We tend to not pay too much attention to the fans that tell us that they want us to make Infest again. If you want to hear Infest then you can listen to Infest and you’ll be happy. We’re not the same people now as we were then.

“If I said that you should dress like you did when you were 15 then you would say that you’re not the same person now and your tastes have changed. That’s how we look at it. We want people to like our music but not to the point where we are unhappy with what we are doing.”

Do you have any favourite guitar moments from Crooked Teeth?

“I would say the song Crooked Teeth, I love that. That was me feeding off the energy in the room. Colin had set up a tempo and a beat and as I was coming up with it everybody was in the room saying, ‘Oh yeah, do that again.’ It was a quick creation.

“The way that song works with all of the different beats is something that I love. Other moments on the record I like are things like Born For Greatness. It’s not typical for us to that bluesy kind of stuff but I love how it works in juxtaposition with the big drum ’n’ bass sound of that song. Sunrise Trailer Park has a little solo at the end of the song as well, and I love the tone of that and how it came out. The record is full of stuff that I love.”

What is the biggest lesson that you’ve learnt in the 20 years since your first album?

“Oh man, we’ve learned a lot of lessons. The thing we keep coming back to is having that relationship with our fans and how well that has served us over the years.

“I could say that if I could go back and tell my younger self something then it would be to not be utterly wasteful with money, but everybody will go through that. But when thinking that this is our ninth album, the biggest thing I have learned is how important that connection to our fans is. We recognise and appreciate that and we know that it has to continue.”

Crooked Teeth is released on 19 May.