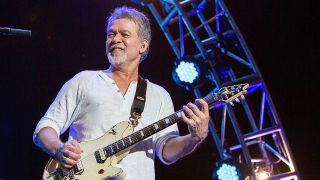 Eddie Van Halen is allegedly suffering from throat cancer and has been undergoing treatment in Germany over the last five years. The new claim by entertainment site TMZ has surfaced following increased speculation about why a mooted Van Halen reunion with original bassist Michael Anthony last summer fell apart.

After five years of radiation treatment in Germany, the source said to have ‘direct knowledge’ told TMZ that, 'for the most part it's worked to keep the disease in check' and he is 'doing okay'.

The 64-year old icon was originally diagnosed with tongue cancer 20 years ago and the heavy smoker blamed that on other factors, including holding a metal guitar pick in his mouth. “I used metal picks,” he told Billboard in 2015, “they're brass and copper – which I always held in my mouth, in the exact place where I got the tongue cancer.

“Plus, I basically live in a recording studio that's filled with electromagnetic energy," he added. "So that's one theory. I mean, I was smoking and doing a lot of drugs and a lot of everything. But at the same time, my lungs are totally clear. This is just my own theory, but the doctors say it's possible.”

Eddie had a third of his tongue removed in 2000 and was reportedly declared cancer free two years later. He last played with Van Halen alongside his bassist son Wolfgang Van Halen, brother Alex Van Halen on drums and singer David Lee Roth in 2015 at the LA Hollywood Bowl on 2 October, bringing into question the exact timeline of the throat cancer treatment claim.

Last month his close friend, Toto’s Steve Lukather alluded to health issues with the guitarist being the possible reason behind Van Halen’s inaction in recent years when he spoke to the Eddie Trunk Podcast. “There's been some health issues that they're dealing with and stuff like that,” Lukather said. “We're older guys now, and to go on the road, and stuff like that, it requires a lot of extra effort in terms of as a human being.'

Frontman David Lee Roth is currently planning a Las Vegas residency in January and while he’s stopped short of referencing any health concerns when it comes to his bandmate, he’s not expecting the band to return to the stage any time soon, if at all…

“I’ve inherited the band, de facto, whatever that means,” Roth claimed during an interview with the Talkin’ Rock with Meltdown podcast from Detroit’s 101 WRIF. “I think it means, you’ve inherited it, carry this proudly. Van Halen isn’t going to be coming back in the fashion that you know. And, that being said, Eddie’s got his own story to tell — not mine to tell it.”