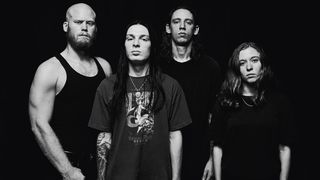 They might be a young band, but the unbridled anger and power of acclaimed new album Forever proves that they mean business.

“I signed up for snare drum in fourth grade, then in middle school I started playing jazz drums. I just figured it out and that was it. I went to a public high school and you auditioned to get in. It had music, art, theatre, all the different programmes. It was a really cool opportunity. We played orchestra, we learned how to read music. I learned a lot of feel stuff from a lot of other kids too. There were some really good kids who played in their churches who were insane groove drummers.”

Who influenced your playing style?

“I was never a super ‘drummer’s guy’. Back when I was first getting into punk music, when I was really young, it was bands like Green Day, then I would go more down the rabbit-hole of punk and hardcore, and then metal. We’d be playing jazz things at the same time. I was just kind of making my own style based on what I was physically able to do.”

When did you first start singing and drumming?

“I sang and drummed at the beginning because nobody else wanted to sing. I just wrote the lyrics and was the one coming up with the ideas. I do love drums, but more than that my passion is the overall concept of sculpting music and sculpting the creative aspect on every level.”

Code Orange shows are intense. How do you prepare for those?

“My gas tank is pretty good on it. The singing’s much harder than the drumming. The only time I think about drumming is when I f**k up, otherwise it’s pure muscle memory. In the past couple of years I’ve been doing other physical activities to try to stay in shape and we practise constantly.”

Tell us about your gear.

“I’m playing C&C drums. My friend worked for C&C and I had a hard time getting anybody to help me out. The first drumset he ever built, he gave to me. It changed my life. I use a bunch of big ride cymbals, all Zildjian. I use a Sweet ride as a crash, I use two 22" Ping rides, one as a crash, one as a ride and I use another crash cymbal and hi-hats.”

“I think the drum sound is absolutely amazing on this record. You’d be hard pressed to find a record that, to my ears, the drums sound better. He just nailed a sound that’s different, it’s thick and it’s real but it’s hard.”

What’s next for the band?

“We’re going to come back [to the UK] in June and do something big as f**k and play some big-ass festivals and steal some more of these kids’ souls.”