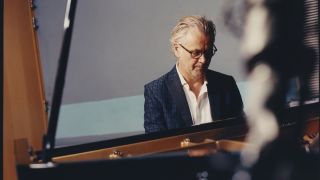 They say the numbers don’t lie, yet Guy Chambers has sold so many records that numbers almost become meaningless.

He is, of course, the classically-trained musical brain behind Robbie Williams’ biggest hits, including Angels, Feel, Rock DJ and Let Me Entertain You. He’s also taken the role of musical director, plus pianist/guitarist, for much of Williams’ solo live career.

It hasn’t all been about Robbie, though: Chambers has written with the likes of Kylie Minogue, Marlon Roudette, Texas, Rufus Wainwright, Texas, James Blunt and Katie Melua, though the fact that these names are seen as footnotes on his CV says something about the scale of Chambers and Williams’ songwriting success.

Born in Hammersmith and raised in the Surrey suburbs, Chambers was already a music fanatic before a move to Liverpool. The vibrant late-’70s theatre and post-punk scene he encountered aged 13 cemented his passion.

“My dad was an orchestral musician in the London Philharmonic Orchestra,” explains Chambers. “He used to take me to rehearsals from quite an early age. That was a mindblowing experience, hearing an orchestra in the Royal Festival Hall on my own. That had a big impression on me.”

It lit a spark that would see Chambers embark on his own journey, one that would take in bands big and small, training in composition at the Guildhall School Of Music and, eventually, a vital role in the success of the biggest British-born solo artist of all time, Robbie Williams.

He's recently returned to the Williams oeuvre with Go Gentle Into The Light, an album of solo piano versions of some of the former Take That singer's biggest hits.

We spoke to Guy about the lessons he’s learned on the way, including the value of classical music in the pop world, the wastage rate for songwriters, and how we really need a better word for networking. What’s more, he distilled all of his know-how into five must-read tips for budding songwriters...

“I was in a church choir from about the age of seven. Being in a choir was incredibly useful because it taught me ear training and how different harmonies work. That technique of knowing how to place a harmony with a lead vocal I use every day. It’s very important. You can completely transcend a song through the right harmony.

“They gave me ear training lessons. You'd get a different colour ribbon depending on how good your ear training was and it went to, I think, level three, ending up with a red ribbon. If you got the red ribbon, it meant that not only could you sing really well, but you could also hear a melody and write it down!

“That mobility of being able to be in a room with another musician and to be able to pick up what they're doing really quickly is very important. And I think I got that from being in a choir.

“Even if you don't play any instruments - and I know plenty of producers who don’t; their instrument is their laptop and I totally respect that - being able to sing ideas to other people is crucial, even if you can't sing very well. In my case, I don't like my voice, but I have to use it. If I'm in a room with someone like Robbie, I will end up singing melodies to him. And the better you can sing those melodies, the clearer the idea is.”

“I did a degree and post-grad in composition at the Guildhall School of Music and I’m thankful for my classic training every day. Not least because in the classical music field, there's endless inspiration.

“I was only yesterday listening to Poulenc’s Double Piano Concerto, which I didn't know - amazing ideas in that piece, to be potentially used. It's such a rich world. It's like painting; you go back into the history of art and it's just endless talent. And it's the same with classical music.

“I’m very indebted to the knowledge I picked up at the Guildhall. I didn't particularly enjoy it at the time to be honest with you - I found it very straight-laced and old-fashioned - but looking back at it now, it gave me a discipline that I'm very thankful for.

“For instance, it means that you can take a melody and you know how to harmonise it in five different ways. I’ve written a musical with Robbie called Boy In The Dress, and we're using a lot of those techniques in the musical where themes come back throughout the show - leitmotifs, as they're called in classical music.

“Just knowing how great songs work is also absolutely crucial as a songwriter. You shouldn't be ignorant of the past.”

3. Networking is a bad word, not a bad thing

“You never know, when you go down a path, where it will lead.  For instance, there was a Jimmy Nail tour that I took because it paid for the roof to be fixed, but I met some really good musicians, some of whom played on Robbie's first album.

“I hate this word so much, but I'm going to have to use it… networking. If there's a better word, please find a better word for me, but it is so important.

“But, you know, if you're on tour with people or you're working on a project with people, keep in touch with them. Friend-them-up regularly! The ones you like, anyway. I think I've been fairly good at that over my career. One thing has led to another because I've made an effort to (hopefully) be fun to be with and be social.

“I think one of the dangers now with technology is the way that technology's deeply addictive. It's stopping people from being social animals. And socialising, again, for want of a better word, is essential in music. It's all about social interaction, it really is. That's one of the key parts, that charm. You need to be charming, for want of a better word, to be a great songwriter. All the great songwriters I've worked with are charming, you know. And quite a lot of them are really good salesmen as well!”

4. Songs are not a finite resource - accept there will be wastage

“Your wastage rate as a songwriter varies. It depends. There's a guy I wrote with called Marlon Roudette and we wrote a song called New Age that was huge in Europe. It was number one in Germany for nine weeks. But that was our very first writing session together, and we wrote that song first thing. And then we wrote many other songs together. By the way, Marlon's since written songs for Dua Lipa and he's become very successful now as a songwriter, as well an artist.

“Then, on Robbie's last album, The Heavy Entertainment Show, we must have written… I wouldn't want to say a number, but we wrote a lot of songs to get to the few that ended up on the record. I think if songs are good they will find a home, but I think, if you’re a young songwriter, you mustn't be disheartened by the fact that maybe only one in 10 of your songs gets used, or it could be one in 20. It could even be one in 50. It’s quality, not quantity - always, always, always.

“Max Martin is the world's most successful songwriter [behind huge hits for Katy Perry, Britney Spears and Taylor Swift] and when I hung out with him, he said to me, ‘I feel good if I have one number one a year.’ I mean, it has to be a number one! But for him, one mega hit a year was enough. And he would go through hundreds of ideas to get to that one song.

“I also try to keep a note of these ideas and file them, and rate them, so if I am in a room with someone, I can find the best ideas quickly. There might be 500 ideas on my phone, but only maybe 20 are worth playing for someone.”

5. Great songs are relatable - but have their own identity

“What do my most successful songs with Robbie have in common? I think the ability for an audience to sing them. That's a really obvious one. Anyone can sing our biggest songs.

“I also think they all have their own unique harmonic world. At least, the Robbie songs do, I know that. They aren't the typical chords. That gives them a strong identity, I think.

“Lastly, production-wise, when we made those records we spent a long time making them as classic as possible and as exciting and as colourful and interesting so that they would last a long time and then not sound really tired. History will be a judge of that, but I still think the best ones stand up quite well even though they're 20 years old, some of them now.

“[Ultimately] the singer has to feel sincere and has got to sing that song for the rest of their life, so it needs to be something they can really feel. I think all the great writing, even though it even might have personal details in it, people can relate to. People have very good imaginations, you know? I think you need to give the public credit for that.”