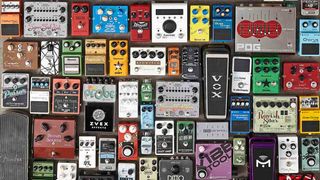 What, too many? (Image credit: Jesse Wild/Future)

In our latest effort to dispel myths and discover what guitarists really think, we want to talk about pedals: are they - so say certain Facebook commentators - merely a crutch?

Are you of the mindset that a guitarist can only truly call themselves a musician when there's nothing but a cable between their instrument and amp, or does a well-stocked pedalboard provide the pedestal upon which you exhibit your skills?

Let us not forget that whole genres can be built on effects - the importance of delay and reverb can never be understated - but maybe we'd all be better off if we just unplugged and sat down with a dreadnought, and let our playing run wild, free and naked.

Plus, if the pedal industry's never been bigger, and pedals really are cheating, what does that say about guitar playing in 2016?

What do you think? Well, you were very much on the side of pedals as a form of expression with this one, but there were some thoughtful comments on the importance of building up technique first, as well as stripping back effects-heavy tracks to their songwriting core.

You can read our pick of this week's answers below. Until next time!

Your answers: are effects pedals cheating?

"Effects extend the range of possible tones & textures available from a guitar. To imply that, for example, Adrian Belew's enormous catalogue of 'non-guitar' sounds are somehow 'cheating' is just weird."

"FX are a colour as paint is to an artist. It's how you use them that makes the difference from junk to interesting."

"By the same logic, cars should do fine without flashy exteriors, houses should be drab and grey, guitarists wouldn't need to bother with looks and girls should get rid of all their jewellery and bling.

"Using pedals is absolutely not cheating. You're not going to tell me that Gilmour is cheating. Nor Frampton, Clapton, and a slew of others. The entire shoegaze genre wouldn't even exist without pedals. (I'm a fan of Ride and Lush.)

"The real question is, 'Can the musician's arrangements stand up to an acoustic set?' Even in the case of Ride and Lush, the answer is a resounding, 'YES!' The songs are still solid. Ergo, no, it's not cheating."

"Pedals are great in moderation. How each player decides to use them is a reflection of their artistic preferences. If someone wants to tap out some Van Halen licks with a bunch of distortion and sustain just to look cool in a guitar shop, its not the pedal's fault!"

"Buying readymade guitar strings is cheating. Real men roll their own and digs a mine using just their bare hands and their teeth to get the ore. Using tools to dig ore is cheating."

"If you can play like what you are thinking and with feeling, it's not cheating, but it's so easy to overdo it. So the pedals are like the gear of an engineer or a pilot; you need to have sound knowledge to make the most of it."

"What kind of idiot might say something as stupid as comparing pedals to cheating!? That is so stupid and closed minded that it doesn't belong in an intelligent conversation…"

"Oh please, it's the player, not the machines. Effects enhance a good player. Shitty players are just that, shitty players!"

"No. There's no 'cheating' in making music. It's about translating ideas from person to person through a performative medium, whatever tools (yes, even Auto-Tune or automatic chord generators) it takes to do that."

"Effects are great as long as you are also a strong player without them. If your effects shut off and it's just you and the amp and you can't play anything of good quality, you need to do some studying and practising.

"I love my delays, choruses and reverbs, but sometimes I get envious of the horn player who has his body and instrument and gets good tone, and even feel a little guilty at times."

"Depends on if you used them from the first lesson or if you just add them for what they are to an already-developed technique.
"So, if you're a beginner using a bunch of these, then you're definitely cheating… mostly yourself.If you've reach a certain stage of accomplishment and add these to create even more, you're definitely not cheating… anyone."

"Like any music technology, it's just a tool to help someone express their creativity. The gear never makes the player, but there's a purpose to it in certain playing situations and that's all good. As long as some guys are not hiding the truth of their playing behind it. A good player's a good player, and they usually sound good on an acoustic guitar simply because because they can actually play the damn thing.

"No, but sometimes they're used to cheat when guitarists get too reliant on them, such as Kirk Hammett with wah or The Edge with… Well, all of them."

"It's not cheating, but may pose some problems in live situations (dying batteries, faulty cables AND non-technical guitar players who forget all the buttons they need to push)."

"Of course using effects pedals isn't cheating. I personally would define cheating as using corrective technology of some sort to falsify an artist's performance/musical ability, and I don't think that's what using pedals do. They're used for creative purposes, to manipulate sounds for artistic effect and suit personal tastes/whatever suits the mood of a song. They expand the range of timbres you can get from only using one instrument.

"It's not cheating. They are tools for sound construction, like ingredients for cooking."

"I do believe that 90% of the soul lies in the guitar-amp combination."

"Using effects pedals is not cheating. However, they can be used to cheat."

Is guitar tone in the fingers?

Are guitarists open to innovation?