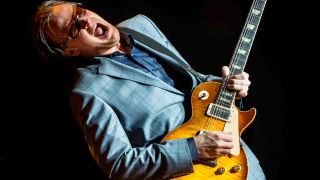 Joe Bonamassa's love of the British blues is at the heart of his musical inspiration, and, for the first time, on Monday 27 June, he will perform a free 'invitation-only' concert at the legendary Cavern Club venue in Liverpool, as a thank you to all the fans that have helped his career grow from playing small clubs to sold-out arena tours worldwide.

Tickets to this gig cannot be purchased, so this is one of the only ways to see the blues hero at this intimate concert, held at the Cavern Club in Liverpool on Monday 27 June.

Winners will be notified of their win by email, and will be asked to bring photo ID to the venue on the night of the concert. In exchange, they will be presented with a special wristband that will gain them access into the Cavern Club. No physical tickets will be sent out.

This intimate concert in front of 300 people will preview material that Joe will perform at five special concerts in the UK this July, where he will pay homage to the British blues rock guitarists that inspired him: Eric Clapton, Jeff Beck and Jimmy Page. This one-time only UK concert experience is billed as Joe Bonamassa In Concert: A Salute To The British Blues Explosion.

When Joe plays the Cavern Club on 27 June, he will also be inducted into the Cavern Club's historic Wall of Fame, where he will be commemorated with a special brick in the wall with his name inscribed on the brick. Previous artists to be inducted include The Beatles, The Rolling Stones, John Lee Hooker, The Kinks, John Mayall & the Bluesbreakers, and many more musical icons.

"This is a once in a lifetime opportunity for me," says a jubilant Joe Bonamassa. "I'm so excited to be performing the British Blues Explosion concerts for very first time at the Cavern Club, the same venue where The Beatles first played. It's the perfect venue for me to showcase the music of Jeff Beck, Eric Clapton and Page. I hope my fans will get a kick out of it as much as I do."

Eric Clapton, Jeff Beck and Jimmy Page are some of the greatest guitarists of their time, and influenced Joe Bonamassa's career. All three are Yardbirds alumni, and indeed actually all played together at one time in the same band.

Jimmy Page went on to form Led Zeppelin, who became the ultimate electric blues band and both Eric Clapton and Jeff Beck became international superstars in their own right.

"If it wasn't for certain British musicians of the early 1960s, the blues may well never have exploded into rock music as we know it today, and indeed may have passed into history," says Bonamassa.

If you don't manage to snag a pair of tickets to the Cavern Club show, Joe also tours his British Blues Explosion concerts in the UK this July. Tickets are available from Ticketmaster and Joe Bonamassa.

JOE BONAMASSA IN CONCERT: A SALUTE TO THE BRITISH BLUES EXPLOSION
A HOMAGE TO THE MUSIC OF JEFF BECK, ERIC CLAPTON AND JIMMY PAGE