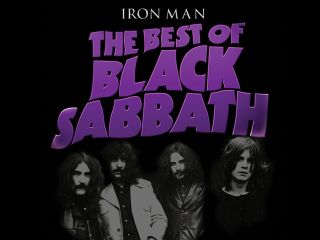 Iron Man: The Best Of Black Sabbath is released through Sanctuary on 4 June 2012

The 2012 Black Sabbath reunion has been one of the most talked-about musical happenings of recent years. With the band's first show just days away, anticipation is reaching fever pitch.

19 May sees Sabbath take to the stage at Birmingham O2 Academy as a warm-up for the band's headline slot at Download on Sunday 10 June. Obviously, the gig is completely sold out, and you can't get tickets anywhere, right? Wrong.

In a pretty damn exciting competition, we can offer one lucky winner a pair of tickets to Saturday's show at Birmingham O2 Academy, plus two copies of Iron Man: The Best Of Black Sabbath, a new compilation album set for a 4 June release, and copies of the deluxe editions of every Black Sabbath album from the Ozzy era. Now that is a lot of Sabbath.

Five runners up will receive copies of Iron Man: The Best Of Black Sabbath. To enter, simply answer the question below. The main winner will be responsible for all of their own travel costs and arrangements and will be informed on Friday 18 May. Deadline for entry is midnight on Thursday 17 May so hurry up and get those entries in!

To be in with a chance of winning two tickets to see Black Sabbath this Saturday, simply answer the following question...

Which band did Tony Iommi briefly leave Earth to join in 1968?

A) The Yardbirds
B) Jethro Tull
C) Mountain

The album brings some of the best loved and most influential rock songs of all time together on one disc - including such classics as Paranoid, Iron Man, Black Sabbath, Sabbath Bloody Sabbath, War Pigs and Changes.