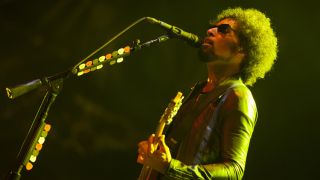 "What we put ourselves through to make a record is intense" (Image credit: Mark Spowart/Demotix/Corbis)

When the news first broke in 2008 that Alice In Chains were back in the studio recording their first album in 14 years - the band's first since the passing of frontman Layne Staley - it's fair to say that reception was mixed.

But once the band dropped Black Gives Way To Blue, the doubters were well and truly silenced. The likes of Check My Brain and Your Decision stood up to the best the band's back catalogue had to offer, and new frontman DuVall proved the perfect counterpoint to Jerry Cantrell's skull-crushing riffs and dual vocals.

Having proved the critics wrong once, the band set about doing it all over again with The Devil Put Dinosaurs Here. We sat down with DuVall to get the inside skinny on the band's return…

Recording Black Gives Way To Blue was a big, daunting task. Were you more comfortable this time around?

"Yeah, it was more comfortable than the first time. The first time we were burdened with the whole static coming from the outside world on whether we even had the right to exist according to peoples' opinions out there.

"We had to shut a lot of that out and just deal with what we wanted to do on Black Gives Way To Blue. We had to assert our right to exist first of all in our own minds and then in the studio. Then we brought that album out to the public in order to assert that right to the wider public.

"That was a bit of a mountain to climb as you might imagine. Of course, we had already done a lot of road miles before even going into the studio on Black Gives Way To Blue. That had kind of cemented us as a unit and gave us the momentum to go into the studio."

Were you surprised at the reaction to that record?

"Once we put that album out and toured it extensively all over the world, and added more road miles to our already established thing as a live band, that legitimized it further as a band and also to the public.

"So, going in to do this album we at least weren't as burdened with that whole thing. It was more of a settled question and that way you can get more down and settled with the music.

"What we put ourselves through to make a record is intense enough as it is, so it's not like it's going to be some cakewalk no matter what. But, at least this time it was more about just the music and our internal process rather than any of that other stuff. So that was a relief."

As you say, the first album was released at a time when the public was piling pressure on the band. Was the pressure still there whilst recording The Devil Put Dinosaurs Here?

"I'm sure it was still there in the minds of some people but by that time we had this overwhelming momentum and I think there was an overwhelming majority opinion that this is the real deal.

"Anybody can have an opinion about whatever, but this machine is rolling now. That was a big difference for sure."

How did writing work this time round?

"There's things where we start out separately and demo things and then listen and go back and forth, but there is also, y'know, Cantrell might send something and then I might have something to augment that, there's a lot of that.

"Eventually after a few months of that you get into a room together for pre-production. Then you are in there playing stuff out as a band, and that sets you up for going into the studio properly."

How did you settle on guitar tones and gear?

"One thing that is really cool about the process that we established on Black Gives Way To Blue - and that we have carried over to The Devil Put Dinosaurs Here - is that with Nick Raskulinecz and Paul Figueroa our engineer, there is a ton of gear between what we bring to the table and what Nick brings from his own collection.

"He has got a lot of really fantastic old amps, like Laney amps, AC30s, stuff that is really good and is a bit more obscure and off the beaten path from just 'Oh, here is my old Plexi Marshall, again.' We've got those but when we come together with our stuff and his stuff there is a lot to choose from."

So it was a case of mixing and matching?

"What we did on this album was we set up a situation where there would be five amps going at any given time. We would run them through a Radial, one of those JD7 radio rack units that kind of split the amps and kept everything even and kept all of the power together.

"That allowed us to run all of those amps and cabs at the same time and then we could pick and choose our blend as we went. That was really great.

"We could have a Bogner Uberschall right up against an AC30, right up against an old Plexi and maybe throw in a Laney or something, and that allowed us to say, 'Maybe this one amp is great for the mid range so we'll just use this amp for most of our low mids, and then we're going to use this other amp for most for our high mids, and have this one over here growling for the lowest of the low tones.'

"Together it made this wall and then you multitrack that wall and you start layering performances using that wall and then maybe switch out two or three from your chain and maybe throw this old Orange amp in there, it really becomes this very complex thing. That was cool. That was a luxury for a gear head."

Is that wealth of gear key to the album's powerful guitar sound?

"I think it is a luxury. I think you can achieve a great deal of layering and stuff without having a ton of amps. You don't need to have those, but it is good to have it if you know how to use it.

"But, of course, in the wrong hands that stuff can be a disaster too. So, we're lucky in that we all have ears and we all have our opinions.

"None of us are new to this, we're all bringing our own thing to the table and then Nick is bringing his knowledge. When you put that collective together the luxury of having a lot of different gear becomes an asset and not a liability."

Is getting the balance between meticulously finding the right tone and keeping things fresh key?

"There are also places where you want to keep it simple too, even with our thing. The guitar solo on Phantom Limb, I just brought in my number one Les Paul, plugged in to one of Cantrell's Marsha amps, he has those Dave Friedman Marshas, and I knocked it out in a couple of takes. Boom, it maybe took half an hour.

"So, there's both the meticulous thing of taking three hours to get one rhythm track because the tuning has got to be exactly right, and then there is just going in and knocking it out. We do both."