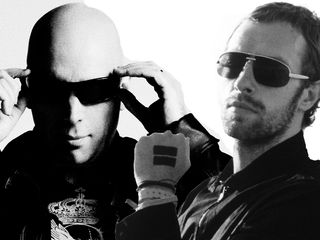 Satch and Chris Martin: Who will have the bigger Grammy night?

Wonder if Gwyneth Paltrow can sing a mean version of Coldplay's Viva La Vida? She may have to at this weekend's Grammy Awards.

The reason? The lawyer repping Joe Satriani is sending teams of process servers to the show to hand Coldplay a plagiarism lawsuit.

As we've reported in the past, guitarist Joe Satriani is suing Coldplay for copyright infringement for their Grammy-nominated song Viva La Vida, claiming the 2008 track copies "substantial original portions" of his song If I Could Fly, which was released in 2004.

Coldplay have remained mainly mum on the subject (Satriani says, "They just wanted this whole thing to go away"), although they did post a denial of any wrongdoing on their website.

Do Coldplay wish they could fly?

However, according to Fox News, since filing the lawsuit on 4 December 2008, Satriani's attorney Howard King claims that Coldplay have evaded being served with papers - and in his view, The Grammy Awards are as good a place as any to get the job done.

Says King, "We have warned [Coldplay's] British lawyers that we have hired a fleet of process servers lined up to dog the band everywhere they go this weekend in the hopes of serving them." King even discloses that camera crews may be accompanying the process servers to document the proceedings.

Whatever your opinion on the matter is, you have to hand it to Satriani - he's sticking to his guns on this one. In the parlance of The Sopranos, perhaps it's time everybody had a little "sitdown" before this really gets Viva La Loco.

Update: As this story was going to press, it was announced that Coldplay will be profiled on a segment on 60 Minutes in the US in the hour preceding the Grammy Awards.