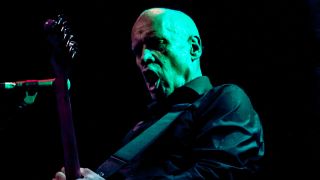 Wilko Johnson, the former guitarist with Dr Feelgood who was recently diagnosed with terminalcancer of the pancreas, has announced a four date farewell tour, to take place in March.

The 65 year old Johnson, who rose to prominence as the Telecaster-toting guitarist with seminal pub rockers Dr Feelgood, has decided not to undergo chemotherapy. "The four UK dates represent an opportunity for Wilko to express his sincere thanks to his fans for all the support he has had over his long career," commented his manager Robert Hoy.

The magnificent Dr Feelgood, with Wilko in full flight

The dates for the tour are as follows: