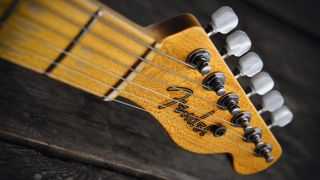 Away from the megastar hoopla of the televised 2009 Grammy awards, a few other gongs were handed out - and one was a posthumous award for Clarence 'Leo' Fender.

Before the main Grammy show of 8 February, Leo Fender was posthumously honoured with the Academy's Technical Award during a lower-key ceremony on 7 February. Leo Fender died in 1991.

Bruce Springsteen, Keith Richards, The Edge and Eric Clapton have all paid tribute to the man whose company invented the Stratocaster, Telecaster, numerous classic amps and also set a benchmark for mass-scale guitar building.

Leo Fender's achievements in the guitar industry are too many to summarise here, so we'll let some stars have their say and roll some classic footage…

Writing for the LA Times, these tributes were paid:

"The first time I saw one was in Jerry Lee Lewis' band in some footage from [the 1958 film] High School Confidential. His bass player was playing a Fender Jazz Bass. I'd never seen anything like that solidbody guitar before. That was it for me. It was the perfect design. It looked like a spaceship.

"I loved that it was new and exciting and like science fiction… He had a very small budget to make those early guitars, so every decision he made about design was about function… That's why that guitar is perfect. He didn't care what it looked like; it was about function. That's the cornerstone of why the Strat and the Tele are what they are, and why they cannot be improved on."

"When we got our record deal, the first thing I did was go out and buy another Strat. It's the black one, that's the one I recorded a lot of our big, important songs with, Pride (In The Name Of Love), Where The Streets Have No Name, major U2 songs…

"There is something completely unique about the Strat. What's really special is that something so simple and so mass-produced should end up with such a kind of subtle and unique and amazing sound quality. All of the guitars that had gone before - the great Gretsches, the big Gibson archtop guitars - were all complex designs that were much more like cellos or violins, construction-wise. But with the Strat, you get this plank of wood with a neck stuck into it. Yet it just sings.

"It's an incredibly inspiring instrument. . . . It's like the '57 Chevy of guitars. It's the pinnacle of something that was very special about that time in history."

Watch U2's Where The Streets Have No Name, live at Slane Castle, 2001

"My first opportunity to strike the strings on a guitar was on a Stratocaster. My first instrument was a Gibson single pickup, single cutaway Melody Maker. Make no mistake: it's a fine instrument in its own right. Yet I don't think there was ever one soloist or instrumentalist that didn't at some point have their sights set on a Strat, including me and everybody I knew.

"The Strat is really the global cornerstone, the reference point of the perception of the contemporary electric guitar… Just about everything up till now has aimed to equal or improve upon the Stratocaster, but in the words of a dear musician buddy of mine: 'How fancy do you think you really have to get?" Answer: Get a Strat and you can do it all.

"The first time I saw one, I thought it was a joke. Lloyd Price came to Baton Rouge with Guitar Slim… Slim had this 100-foot cord, and I saw this [Stratocaster] guitar he had with a fishline for his shoulder strap. I stood there in shock and thought: 'What the hell is this - he didn't make enough money to buy a string?'

"That guitar grabbed a hold of me and I'm still hung on it… Playing any other guitar is like putting on a glove that's too small, then putting one on that you've been wearing for five years… If you see me change from a Strat, it means I done broke a string."

"There are two kinds of people in the world: those that play Stratocasters, and those that play Telecasters… Robbie Robertson, who had an affinity for both guitars, gave me a beautiful Strat [that] I play on occasion in the studio. However, when that big rock 'n' roll clock strikes 12, I will be buried with my Tele on…

"The Stratocaster is a great and iconic instrument… a guitar that has contributed greatly to rock 'n' roll, a fine and wonderful instrument. It's just not a Tele."

Watch Springsteen + Esquire playing Born To Run back in 1975

"The Tele is the workhorse; the Strat is the racehorse, the stallion. It's an amazing machine, but it's very hard for me to talk about just one thing that Leo Fender made. It wasn't until I realized that when you put your Fenders through your Fender amp, then you start to revel in the glory of it all. It's the matched pair; the matching of his stuff to his amplifiers, then suddenly you get it. It springs to life…

"There's a beautiful individuality about Leo's work. We're talking about a guy who made guitars in Fullerton, California, and changed the way we listen to music. It's an amazing thing."

Amen to all that. Here's to guitarists' favourite Grammy winner, Leo Fender…