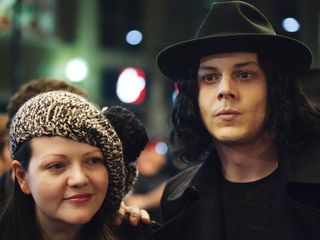 The White Stripes are seeing red over an Air Force Reserve recruitment TV ad that ran during the Super Bowl, claiming the spot cops their song "Fell In Love With A Girl."

In a strongly worded statement on the White Stripes' website, the band says, "We believe our song was re-recorded and used without permission of the White Stripes, our publishers, label or management.

"We have not licensed this song to the Air Force Reserve and we plan to take strong action to stop the ad containing this music."

Looks like they've already succeeded. On the White Stripes' website, the band were running a link to their original recording of Fell In Love With A Girl" (see the video below), as well as the as the "Grab Some Air" TV ad so viewers could compare the two. The Air Force ad is now no longer available - the link takes viewers to the Air Force Reserve website with no mention of the ad or song.

But here's the Air Force TV spot from YouTube. Check it out and compare for yourself.

Hmmm, that main guitar riff sure sounds familiar, and the other guitar that echoes the vocal melody? Pretty close, wouldn't you say?

"The White Stripes takes strong insult and objection to the Air Force Reserves presenting this advertisement with the implication that we licensed one of our songs to encourage recruitment during a war we do not support," the Stripes write.

"The White Stripes support this nation's military, at home and during times when our country needs and depends on them. We simply don't want to be a cog in the wheel of the current conflict, and hope for a safe and speedy return home for our troops."

For the record, the musician for scoring the TV spot, Kem Kraft told the New York Times that he was sorry for any similarity between the two songs. "It wasn't my intention, truly, truly, truly," he said, adding that if the White Stripes "want to call me and talk to me, as far as I'm concerned, I'm responsible for this. Just me."