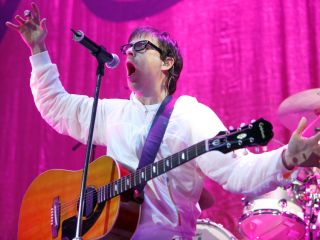 While speculating on a possible label move during recent weeks, Cuomo floated potential album titles. Heavy Mental seemed to be a strong contender before the singer-songwriter and guitarist decided on Hurley. Weezer's last album, 2009's Raditude, fulfilled their legal obligations to Geffen/Interscope.

Now that they're on Epitaph's roster, the band joins acts such as Rancid and Social Distortion. The label, which released a 2004 album called Land, Air, Sea by Weezer drummer Patrick Wilson's side project, The Special Goodness, is also is home to an imprint called Anti- Records. Artists on Anti- include Billy Bragg, Neko Case and Tom Waits.