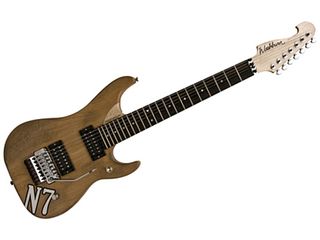 Internet forums aren't just seething bear pits full of ill-advised flame wars about politics and religion, you know. Indeed, some of them provide the scoop on exciting new product announcements long before the manufacturers themselves have got their marketing wheels in spin.

According to the Washburn N4 enthusiasts on the Funky Munky Music forum, Nuno Bettencourt's much-loved six-string N4 signature model is set to be joined by a seven-string sibling fresh from the Washburn Custom Shop.

Eagled-eyed Nuno fans will already have seen the guitarist rocking an N7 alongside Rihanna on American Idol:

The Custom Shop production N7 sports a Seymour Duncan Distortion humbucker in the bridge in place of the N4's Bill Lawrence L500, an alder body, a maple neck and an ebony fretboard. US RRP is expected to be $2799 and Washburn are taking orders right now.

Check out the rest of Nuno Bettencourt's current live rig in the following video filmed by Guitarist magazine on Rihanna's 2010 world tour:

[via I Heart Guitar]