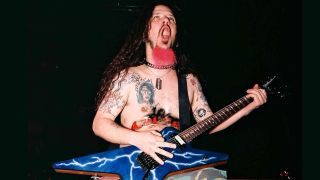 Dimebag Darrell was best known for his unrelenting barrage of killer riffs, but as it turns out, he had a dirty songwriting secret, according to his brother and Pantera bandmate Vinnie Paul.

In a recent interview with Loudwire, which you can watch below, Vinnie reveals that Dime always kept a guitar and a tape recorder in his bathroom.

When Vinnie asked what they were doing there, Dime replied, "Man, that's where I write all my riffs - that's why my riffs are the shit!"

Vinnie continues, "He would have a bad experience at Taco Bell and write a song about it!"

That song - which actually exists - is among a host of rare Dimebag and Damageplan recordings that Vinnie plans to release at some point in the future, several of which feature Dimebag handling vocal duties, too.

We look forward to that. Until then, you'll find us on the loo/can.

For more Dimebag you might not have heard, check out these 7 rare performances you need to hear.