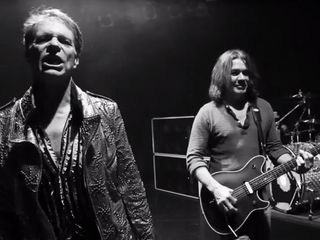 Van Halen have premiered the video for Tattoo, the debut single from their long-awaited album, A Different Kind of Truth, the band's first full-length collection with singer David Lee Roth in 28 years.

The group didn't play Tattoo during their intimate show at the Cafe Wha? in New York City last week; instead, they performed a song called She's The Woman, which is also included on the new record.

The black-and-white clip for Tattoo was shot at The Roxy in Hollywood, where Van Halen were rehearsing for their world tour during the last few months of 2011. Tickets for the initial leg of the tour, which will kick off in Louisville, Kentucky on 18 February, go on VIP advance sale today (10 January) at 9am EST.

OK, so you've had a chance to check out the song. What's the verdict? Tell us what you think!