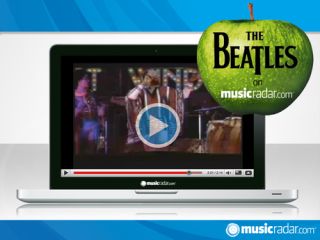 This week, aside from our initially pitched (but swiftly rejected) piece on Beatle-themed fashion tips, we've pretty much hit saturation point with all things Beatles on MusicRadar. So it's time to get the covers out!

But rather than the same old covers you've all heard a gazillion times before, we thought you might like a few versions from all over the place.

So step forward Mr Thomas of Jones, Wilson Pickett (and, erm, the Bee Gees), a surf band from Japan and a really rather affecting Sean Lennon. Really.

Maggie Wong & The Jungle Lynxs - From Me To You

Back in 1964, Paul suggested that this 'McCartney/Lennon' (yes, it's the right way around) number one from 1963 could even be rearranged "as an old ragtime tune". What he didn't suggest was it could be twanged to high heaven by Malaysia's finest exotic pop sensations of the time. Fact: In 1966, Maggie Wong toured Malaysia and Singapore with a show called 'GO GO SHOW'. How cool is that? Mike Goldsmith

Munetaka Inoue & The Sharp Five - She Loves You

Off to Japan! Rather than a 'Group Sounds' (the name for the Beatles-sounding combos to emerge from Japan in the late Sixties) cover, we've gone for an 'eleki' (the name for the Japanese Ventures-style surf/rockabilly craze of the early Sixties) take on one of The Beatles' greatest early singles. Dig this? Read Julian Cope's Japrocksampler for info or just listen to all of Inoue's Beatles covers album Ding Dong! here. Yow! Mike Goldsmith

Classic though it may be, most people wouldn't consider Yesterday very soulful - not until Welsh powerhouse Tom Jones wraps his throat around it and offers up a muscular yet poignant version, as he did on his late '60s/early '70s TV show, This Is Tom Jones. Joe Bosso

Set all your notions about nepotism aside and behold this positively shattering performance by Sean at a tribute to John Lennon concert held in New York just after 9/11. The younger Lennon dedicates the song to Yoko, but he's also singing to a grandmother he never met. A lump-in-the-throat experience. Joe Bosso

The Black Keys - She Said She Said

From their 2002 debut LP The Big Come Up, Dan Auerbach and Patrick Carney give a suitably retro but altogether bluesier treatment to Lennon's acid trip-inspired Revolver track. Chris Vinnicombe

Next page: Peter and Gordon, Pickett, Earth Wind And Fire

Peter And Gordon - A World Without Love

Most people know this song, but not everyone realises that it was written by Paul McCartney, and credited as a Lennon/McCartney composition. Macca didn't consider it good enough for The Beatles, so he offered it to Billy J Kramer, who turned it down. Peter and Gordon recorded it and took it to number one in the UK singles chart. Chris Vinnicombe

Wilson Pickett's studio recording of Hey Jude is a corker - you haven't heard the song's famous coda until you've heard him tear it apart with his guttural roar. In this clip, which sees him trading lines with the brothers Gibb (it must have made sense back in the '70s), Pickett goes into overdrive at 2.54 and keeps his foot on the throttle until the end. Ben Rogerson

Earth Wind And Fire - Got To Get You Into My Life

Starring The Bee Gees (yep, them again), the 1978 Sgt. Pepper's Lonely Hearts Club Band musical film was described by Perry Seibert of Allmovie as "quite possibly the silliest movie ever conceived." This video probably won't convince you otherwise, but EWAF's cover of GTGYIML still slinks like one of those metal coil things that goes down stairs. Ben Rogerson

Next page: Adam Green and a three-part harmony Blackbird...

Adam Green - I Will

There's a clip in The Beatles Anthology of Paul McCartney and George Harrison playing a ukulele version of 'The White Album's' I Will - evidently this was inspiration enough for former Moldy Peaches dude, Adam Green, to copy. Albeit with a freestyled intro about feeding his girlfriend 15 pills in bed: "Pills are for losers, P is for Pills, C is for Call me… if you wake up." Sick. Tom Porter

Live at Woodstock, CSN augmented Paul's plaintive acoustic arrangement with three-part harmonies. Other than one moment where it briefly threatens to fall to bits, it's really rather lovely. Chris Vinnicombe