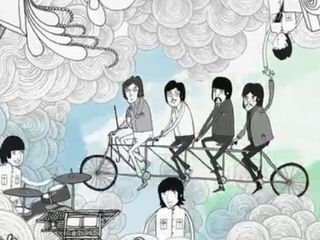 Music Matters to the Fab Four

The Beatles are no strangers to animation, but to the best of our recollections, they've never been rendered as stick figures before. Until now, that is, in a new online short by Lee Gingold that is a supreme delight.

There's a serious message in the film, however, one involving the campaign against music piracy. Paul McCartney, Ringo Star and the estate of The Beatles are supporting Music Matters, which shakes a stern finger at illegal downloading.

Nabbing the biggest musical act of all time is a giant coup for Music Matters, and Gingold's short is nothing, ahem, 'short' of heavenly. In it, he documents his discovery of The Beatles as a youngster and recounts the myriad and splendid ways they touched his life through the years - a universal experience, for sure.

By the way, an animated Bill Murray apparently pops up somewhere in the video, but we have yet to spot him. If you do, let us know where!