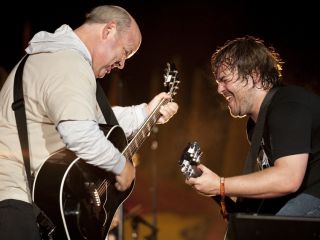 Check out the video performances of the band's classic The Meta (above)l, along with a most tenacious version of The Who's Pinball Wizard (below), complete with a Wackerman drum solo, no less.

Although Black has a pretty happening day job as a big-time movie star, he's throwing himself back into Tenacious D land for the coming months. In May, the band will release their third studio album, Rize Of The Fenix, ahead of their appearance at the Download Festival.

You can stream the title track of Rize Of The Fenix below the second video.