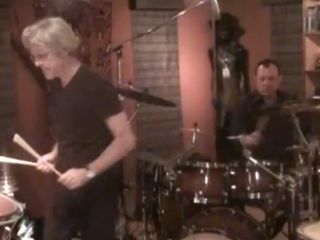 Take one part Rush, add one part Police, stir in one part Primus and gently fold in another part Tool. So what do you get? You get CCCP, of course!

As one might expect, the mostly all-drums, all-star lineup of Neil Peart, Stewart Copeland, Danny Carey and Les Claypool didn't play Louie Louie when they convened at Copeland's home studio last April. Billing themselves as CCCP, at least in the video below, the 'supergroup' dished out a rhythm-heavy ditty called Count Drumula.

As jam sessions go, Count Drumula is engaging stuff, a funky, jazzy groove which is highlighted by Carey showing off his trombone chops and Copeland pitching in on guitar and tuba.

Apparently, the footage had its first public showing at Carey's 50th birthday party last May. So far, there are no plans for the four musicians to collaborate further, so CCCP might be a one-shot deal. Which means that Count Drumula could be considered something of a collector's item. Unless they really did play Louie Louie...