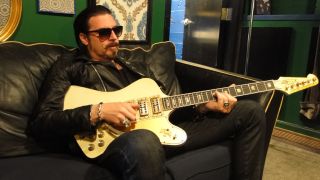 A lot of guitarists prefer to leave the good stuff at home when they go on tour. That doesn't fly with Rival Sons guitarist Scott Holiday. "My guitars are my sound," he tells MusicRadar, "live and on record. Besides, my guitars are my friends. Why would I not bring my friends on the road with me?"

Before a sold-out Rival Sons performance at New York's Gramery Theater, Holiday introduced us to a few of his pals: a 1962 Fender Jazzmaster, a 1965 Gibson Firebird I, a 1999 Gibson Custom Historic Firebird VII and three custom-build Doug Kauer beauties.

What's more, he gave us an up close and personal look at his not one, but two pedal boards (jam-packed with sonic goodies) as well as his amp rig. It's a sweet setup - have a look below.