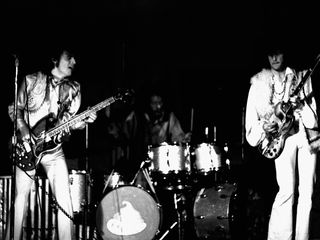 Cream's TV performance of Sunshine Of Your Love is a must-see video (Image credit: Ted Streshinsky/CORBIS)

Further proof that Glen Campbell has always been one cool guy: Back in 1968, when many in country music still branded rock 'n' roll as evil, he invited that wild, psychedelic group Cream to perform on his brand-new CBS TV show. Of course, what would you expect from a former Wrecking Crew guitarist who played on hundreds of seminal rock records?

Beyond that, this incredible clip caught our attention for a number of other reasons: It was filmed during a period in late 1968 when Eric Clapton - widely associated at the time with the Gibson SG, Les Paul and 335 - played a Gibson Reverse Firebird 1.

Also, there's the fact that Cream most definitely performed live, as opposed to lip-synching - already standard practice in the 1960s. Check out Ginger Baker's drumming! A phenomenal display, to be sure, and this video gives viewers a front-row seat for what can only be called bravura musicianship.

And finally, listen to Clapton's guitar tone. It's pretty clean - not at all the wall of distortion he was known for in his Cream years. It has been suggested that the extreme volume levels on his amps would have blow out the TV microphones, and thus Clapton had to keep things low and somewhat tame. In any event, it's fascinating to hear him play the Sunshine Of Your Love solo with such an unaffected sound.

A fantastic video moment, and we have Glen Campbell to thank for it!