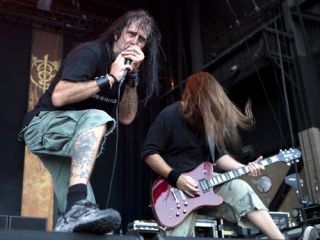 We're very pleased to be teaming up with our good friends at Roadrunner Records and Metal Hammer to bring you the premiere of the new animated video for US riff-mongers Lamb Of God's latest single, Ghost Walking.

Ghost Walking is the first single to be taken from Lamb Of God's seventh studio album, Resolution, which is released next Monday (23 January).

Due to the overwhelming response to the lyric-based video for Ghost Walking, which premiered last month, the band decided to release a second, entirely animated video, produced by Moreframes Animation.

Watch the video for Ghost Walking by Lamb Of God here.

Pick up a copy of Resolution.