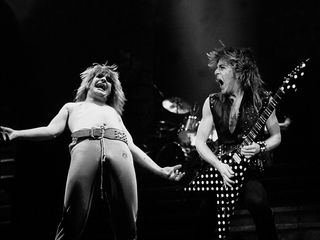 Osbourne is knocked out by Randy Rhoads' playing, then and now

In the recently posted video above, Ozzy Osbourne sits in a studio and listens to an isolated take of Randy Rhoads soloing. Before filming, Osbourne hadn't heard the master tape in 30 years.

The footage is featured in a documentary DVD that is part of the extraordinary Blizzard Of Ozz/Diary Of A Madman boxset that was released by Epic/Legacy last May.

When the set was issued, MusicRadar asked Guns N' Roses guitarist Bumblefoot, a huge Randy Rhoads fan, to review the package. On the section of the DVD above, Bumblefoot wrote, "Watching this, I got kind of welled up with emotion, and that doesn't happen too often.

"Just seeing Ozzy listening to the raw tracks and Randy's isolated takes, the moments where he goes, 'What was that? Where did that come from?', you know what he's feeling. The look in his eyes, the way his face changes at certain points…it hits you in the heart.

Not only that, but Bumblefoot graciously shared his own tribute to Ozzy Osbourne and Randy Rhoads - a recording of high school band (when he was just 13), performing the song Over The Mountain. Check it out here.