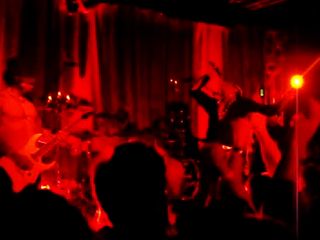 By all accounts, the show was anything but a ritual de lo habitual.

As it was last November, when Jane's played their first full-band 'reunion' show, fans were alerted only three days prior through the Jane's Addiction website. Tickets for the show at LA's Echoplex club were bargain priced at $10, but available to only the first 500 people to sign up, which took a matter of minutes.

News that Jane's Addiction would be touring with Nine Inch Nails, made public hours earlier, created an added sense of excitement around the show. After all, to go up against Trent and his pretty hate NIN machine, Jane's would have to be tight, and they would have to rock hard.

Rock hard they did

To a sea of cell phone cameras held high in the air, the band played a blasted off with Up The Beach and worked their way through a no-nosense set that included all the hits: Ocean Size, Mountain Song, Ted, Just Admit It...Basically, it was the best of Jane's brief, recorded career in one nice little box.

Check out the video below of Jane's performing Stop.

Introducing Been Caught Stealing, singer Perry Farrell said to the crowd, "When we were all kind of broke and saw something we wanted, we just stole it. "Guess what time it is? Time to steal some shit!"

And with that, the place erupted.

If you haven't already planned on seeing Nine Inch Nails' 'Goodbye' tour, a re-invigorated Jane's Addiction should be an added incentive.