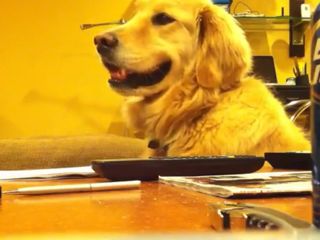 Next to chomping on bones and romping outside, Bailey loves listening to acoustic guitar music

Turns out the saying "Music hath charms to calm the savage breast" (or "beast," as it was changed in a Bugs Bunny cartoon) is true, indeed. Witness the above video of Bailey, a groovy, acoustic guitar-loving golden retriever.

As you can see, Bailey is quite content when Drew Arcoleo, a sophomore at the University of Connecticut, strums away - the dog bobs his head and even appears to smile. But every time Arcoleo stops playing, Bailey stiffens, and he gives the musician a sad, vaguely irritated look.

Arcoleo posted the clip titled "Golden Loves Guitar!!" just before Christmas, and in that time it's racked up over three million views on YouTube. The guitarist's other videos haven't done nearly as well - hits range in the hundreds or thousands. So what's the second-biggest clip on Arcoleo's YouTube channel? The one below, where he talks about the making of "Golden Loves Guitar!!"

Perhaps Bailey should be a permanent fixture in Arcoleo's future video efforts. Hey - whatever works.