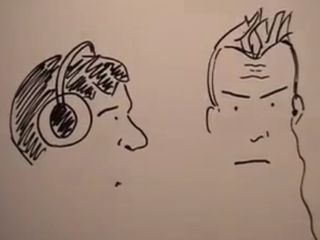 Billy Bob is lost in translation

As you can see on MusicRadar's Best of YouTube: #55, well-known actor-director and Oscar-winning writer Billy Bob Thornton takes his music seriously.

So much so, in fact, that when a Canadian radio host had the nerve to make the sightest mention of Thornton's cinematic career, well, Billy Bob got a tad pissed and gave what is going down as one of the most awkward and painful-to-watch interviews ever - one that's burning up the internet.

(Wonder what the rest of Thornton's band The Boxmasters were thinking: "Thanks, Billy Bob. Haul your own drums around tonight, OK?")

But MusicRadar has uncovered the truth behind Thornton's ire. Turns out he wasn't sore at all, he was merely confused. As the video below vividly demonstrates, Billy Bob brought along Jeremy Fisher to interpret Canadian English to American English, and as Fisher points out, he made some goofs that tripped up the Thornster.