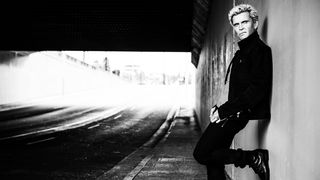 Billy Idol goes for a "widescreen CinemaScope" on his first studio album in nearly a decade. (Image credit: Michael Muller)

"It is a combination of my life put into words, really," Billy Idol says of his upcoming album, Kings & Queens Of The Underground, due out on October 21. "A lot of it's bouncing off my own autobiography, though I've been writing while we were making this record, and so we couldn't help but it be a little bit kind of introspective."

Of the extended gap between releases, Idol says, "Making millions of records is fantastic, but you want to make the right record, so we really waited quite a long time for this sensual feeling - this cinematic, theatrical, 1080 pixels, hi-def… That's the way it feels to me. It feels very like a soundtrack."

In the above video, Idol discusses how he came to work with Horn and why the celebrated record maker and musician, whose resume also includes the soundtracks to films such as Days of Thunder and Toys, was a natural fit for his "widescreen CinemaScope" vision.

Billy Idol's Kings & Queens Of The Underground will be released on October 21. You can pre-order the album at iTunes and Amazon.